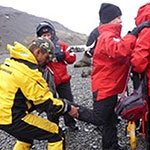 Ensuring South Georgia’s biodiversity is protected from invasive species is a high priority for GSGSSI. We remain constantly alert to new biosecurity threats and to ensure our policies remain up to date and reflect best practice standards. In order to achieve this, each year GSGSSI undertakes an annual review of biosecurity.

Between June 2016 and May 2017, 213 biosecurity checks on cargo and baggage were undertaken by Government staff at King Edward Point and at the gateway port of Stanley, Falkland Islands. Of the 926 items that were individually inspected during these checks, biosecurity infringements i.e. where biosecurity policies had not been followed, were detected on just 24. This equates to just 2.5% of cargo needing remedial action to ensure biosecurity standards were upheld compared to 6.7% the previous year. Infringements were mainly incorrect packing protocols where boxes had arrived not fully sealed or fragments of plant material or dead invertebrates found entrained in contents when they were being unpacked in the biosecurity facility.

In parallel with biosecurity checks on cargo before it enters the territory and immediately on arrival, GSGSSI has an extensive programme of shore based monitoring at South Georgia so it is able to quickly detect if any non-native species were to get into the environment and take action to remove them as needed. There are 42 rodent monitoring stations, 82 mice/invertebrate traps and each year a specialist weed team search King Edward Cove for non-native plants. No incursions or new non-native species have been detected this year. We are constantly looking at ways to improve surveillance and recently trialled ‘e-mitter’ electronic rodent traps.

Given the significant investment made in the recent South Georgia Heritage Trust led rodent eradication programme, GSGSSI has a particular focus on preventing the introduction of rodents to the Territory. All vessels are required to carry bait stations and declare findings to Government Officers on entry into the Maritime Zone. In total 96 bait stations were deployed on vessels including fishing vessels, cruise ships, yachts, Royal Navy and Government vessels. As part of enhanced checks, Government Officers also inspected ships with a particular focus on waste storage and food preparation areas where rodents may live. No signs of rodents were found on any vessels through either the bait boxes or vessel inspections.

As part of GSGSSI’s programme of continuous improvement we are exploring several larger-scale projects which stand to make a significant difference to South Georgia:

GSGSSI is engaging with a range of partners to raise awareness of, and tackle, the biosecurity challenges that we face including those at gateway ports for vessels travelling to South Georgia.

These projects take place alongside a range of other Government programmes seeking to enhance South Georgia’s environmental management and protection, including work to designate terrestrial protected areas as set out in our 5-year strategy.

The 2017-18 Biosecurity Handbook, which contains details of GSGSSI’s current biosecurity policies, can be downloaded here.