The Government of South Georgia & the South Sandwich Islands is pleased to announce the release of its latest stamp issue, which marks the centenary of the Scott Polar Research Institute.

Founded in 1920, as part of the University of Cambridge, the Scott Polar Research Institute (SPRI) is the oldest international centre for polar research within a university. The SPRI’s mission is to enhance the understanding of the polar regions through scholarly research and publication, educating new generations of polar researchers, caring for and making accessible its collections, and projecting the history and environmental significance of the polar regions to the wider community for public benefit. Scientific research in the Institute is focused on ice and environmental change in the polar regions. 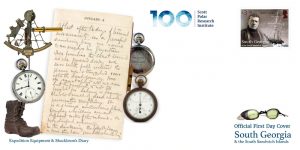 This stamp commemorates the SPRI’s centenary and depicts Sir Ernest Shackleton with the Endurance, which took he and his crew on his third expedition to the Antarctic. Departing in 1914 Shackleton and his men intended to undertake the first crossing of Antarctica via the South Pole. The expedition was known formally as the Imperial Trans-Antarctic Expedition (1914-17) and informally as the Endurance Expedition after the ship. The Endurancebecame trapped in sea ice early in 1915 and ten months later was crushed and sank. Shackleton’s crew had already abandoned the ship to live on the floating sea ice. In April 1916, they set off in three small boats, eventually reaching Elephant Island. Taking five crew members, Shackleton went to find help. In a small boat, the lifeboat James Caird, the six men spent 16 days crossing 800 miles (1,300 km) of ocean to reach South Georgia. They arrived exhausted on the west side of South Georgia, and Shackleton, Frank Worsley and Tom Crean finally trekked across the mountainous island to Stromness whaling station to raise the alarm. The remaining men from the Endurance were rescued from Elephant Island in August 1916.

All the artefacts and the document pictured on the first-day cover envelope are preserved at the SPRI. The sextant (top left), chronometer (centre left) and stopwatch (bottom right of diary) were used by Frank Worsley, captain of the Endurance, to successfully navigate the James Caird lifeboat 800 miles across the Southern Ocean from Elephant Island to South Georgia, an achievement recognised as one of the greatest ever feats of small-boat navigation. Shackleton then returned to Elephant Island aboard the Chilean vessel Yelcho, captained by Luis Pardo, and rescued the remainder of the crew of the Endurance.

Shackleton later gave the chronometer to Worsley to commemorate the journey from Elephant Island. The inscription on the back (top right of diary) reads, ‘F.A. Worsley, from E.H. Shackleton, May 1916’.

The dark brown leather boot (bottom left) was designed by Sir Ernest Shackleton and used during the Endurance Expedition. On the right of the envelope, below the stamp, is a photograph of the goggles used by Shackleton on the same trip. The goggles were given to a Norwegian whaler when Shackleton reached South Georgia after his epic boat journey and were later gifted to the SPRI where they are displayed in the Institute’s Polar Museum.

The central image shows the final diary entry made by Sir Ernest Shackleton. It was written in South Georgia aboard the ship Quest, which was used for his 1921-22 Antarctic expedition. The diary entry reads:

4 January: At last after 16 days of turmoil and anxiety on a peaceful sunshining day we came to anchor in Grytvitken. How familiar the coast seemed as we passed down. We saw with full interest the places we struggled over after the boat journey. Now we must speed all we can but the prospect is not too bright for labour is scarce. The old smell of dead whale permeates everything. It is a strange and curious place. A wonderful evening. In the darkening twilight I saw a lone star hover: gem like above the bay.