Rats were likely introduced to South Georgia with the first sealing expeditions. As human exploration and exploitation on South Georgia prospered, and shore based whaling and sealing camps were established throughout much of the northern and south-western coast, rats spread to infest nearly two thirds of the islands coast line.

Rats eat the eggs and chicks of many ground-nesting bird species. As a result, there have been severe declines in ground nesting sea-birds in many areas.  The endemic South Georgia pipit once bred throughout the island. While rats were present breeding was now confined to rodent-free offshore islands and islets, and a few remaining main-island areas on the south coast where sea-level glaciers had prevented rodent invasion. 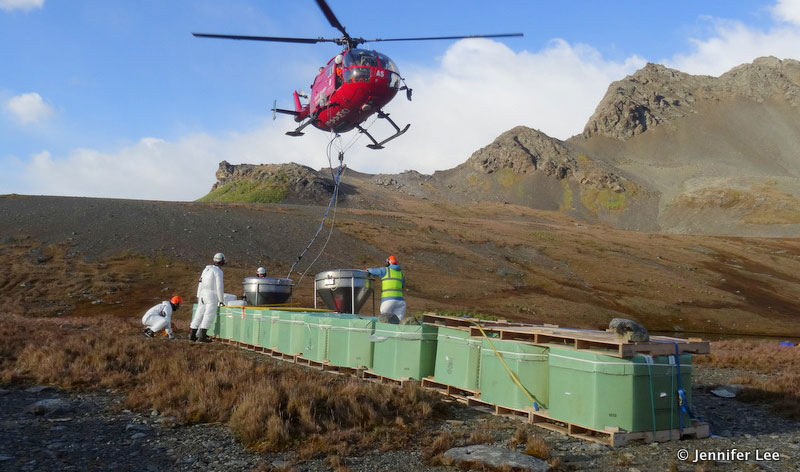 A trial phase took place in 2011 where 12,800 ha of ice free ground was treated. To-date, there have been no signs of rodents in this area giving a strong indication that the trial was successful.

Phase II of the operation took place in 2013 and involved baiting 57,600 ha. The third and final phase of the operation took place in early 2015 and a further 36,380 ha were baited. All areas of the island that were known to be infested with rodents have now been treated and it is hoped that for the first time in more than a hundred years the island will be free from rats and mice. In the coming years it is expected that many of the ground-nesting seabirds that were unable to successfully bread on the mainland will return.

Detailed documentation for all three phases of the SGHT rodent eradication can be downloaded from here.

In parallel with the bait drop, GSGSSI undertook monitoring of mortality in non-target species that died as a result of eating the poison. The principal species to be affected were skua and the South Georgia pintail but it is expected that populations will quickly recover to pre-baiting levels.

Relevant documents including information on post-baiting monitoring, non-target mortality can be found here.