The Government of South Georgia & the South Sandwich Islands is delighted to announce the release of its latest issue of stamps which celebrate the contribution food has made to the story of South Georgia.

Since James Cook first landed on South Georgia in 1775, the island’s history has been closely related to the edible plants and animals found there. Attitudes towards food and appropriate use of natural resources have changed significantly over the subsequent 250 years, but the rich associations and stories behind food remain an important part of the islands cultural heritage. 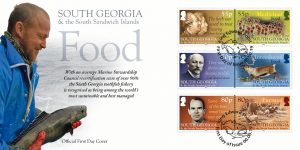 55p Medicinal food – Greater burnet
One of the earliest examples of South Georgia’s biota being eaten by humans was the use of Aceana magellanica, commonly known as greater burnet, that was consumed because of its high vitamin C content. A sample of burnet, collected by Captain Cook’s botanists, Johann Reinhold and Georg Forster, still rests in the Natural History Museum in London. It is thought that burnet was used medicinally by James Weddell when he passed by the island on route to Antarctica to cure scurvy, a disease endemic to ship life before the discovery of vitamin C in the early 20th Century.

70p Introduced food – Reindeer
The 1800’s saw an itinerant wave of sealers and merchant adventurers coming to the island, leaving little evidence of their work other than the occasional tripot and beaches devoid of fur and elephant seals. The establishment of the first whaling station at Grytviken in 1904 brought not only the destructive force of newly mechanised whale catchers, it also brought men with a taste for the flavours of home. Reindeer from Norway were introduced by Carl Anton Larsen in 1911 and thrived on the meagre grasslands on the north coast of South Georgia. In time, their numbers swelled significantly causing untold damage to ground nesting birds and distributing weed seeds as they roamed the island unchecked by predation.

80p Farmed food – Pigs
Farmed animals were brought in to add variety to the diet of the whalers, including sheep, poultry and pigs. Almost all whaling stations had heated piggeries and sustained populations of several hundred animals. During the summer, pigs were allowed to root on the flensing plan leading some to comment that the pork tasted of whale. Pork was also eaten by non-whalers and was a favourite of Anthony Bomford. He was part of the 1950’s survey team that created the first detailed maps of South Georgia’s interior. Along with farmed animals came forage in the form of hay either from Patagonia, the Falklands or Europe carrying with it many non-native plants whose populations still centre on the whaling stations.

When shore based whaling ceased in 1966, decaying infrastructure was left behind. Whalers took with them their farmed animals, leaving rats, mice, reindeer and weeds to spread unchecked across South Georgia. In the last decade, habitat restoration programs authorised by the Government of South Georgia & the South Sandwich Islands (GSGSSI) have successfully removed invasive mammals from the island and work is ongoing to eradicate many of the non-native plant species.

First Day Cover Sustainable food – Toothfish
South Georgia & the South Sandwich Islands still play an important part in providing food resources. The Government has three sustainably managed world-class fisheries, all certified by the Marine Stewardship Council, the largest being toothfish which has an average recertification score of over 96%. It is recognised as being among the world’s most sustainable and best managed. Additionally, the entire South Georgia and South Sandwich Islands maritime zone is covered by conservation measures under the Convention on the Conservation of Antarctic Marine Living Resources (CCAMLR). Established in 1982 CCAMLR protects the oceans around Antarctica from over exploitation and damage by fisheries. GSGSSI have a proud record of not only adopting the CCAMLR conservation measures, but extending them. To further enhance the protection of our maritime zone in 2012 the Government announced the formation of one of the world’s largest Marine Protected Areas. Since then protection has been extended to 1.24 million square kilometres. Within this zone, fishing is heavily regulated not only to ensure healthy fish stocks, but also to ensure food availability to the higher predators such as the seabirds, seals and whales.