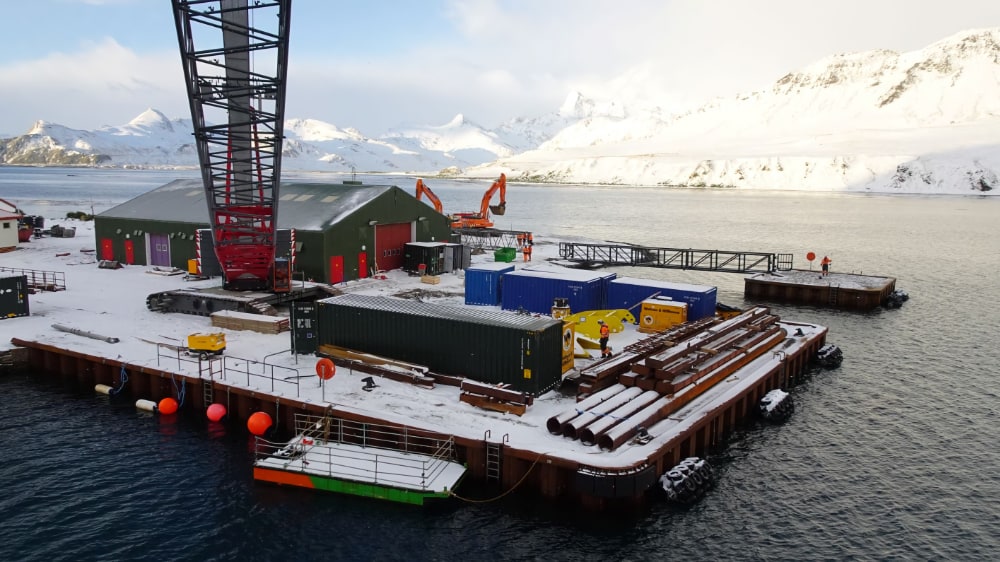 Surrounded by spectacular scenery, dominated by mountains and glaciers, construction has completed on a new £11million wharf, dolphin and slipway to serve the King Edward Point Research Station (KEP).

The new wharf was commissioned by the Natural Environment Research Council (NERC), the Foreign & Commonwealth Office (FCO) and the Government of South Georgia & the South Sandwich Islands (GSGSSI). The sub-Antarctic research station is owned by the GSGSSI and operated on their behalf by British Antarctic Survey (BAS).

The structure was completed on time for Shackleton Day, a special bank holiday in South Georgia.  The commemoration marks explorer Ernest Shackleton’s historic 1300km journey in an open-top boat across the Southern Ocean from Antarctica to South Georgia.

Over two years of meticulous planning meant the wharf was completed in just 108 days – three weeks ahead of schedule. This is a remarkable achievement, as constructing on this sub-Antarctic island means that every nut and bolt had to be sent in a single shipment from the UK.  The nearest builders’ merchant is thousands of miles away.

The new wharf represents an essential upgrade to the station’s infrastructure.  It enhances both safety and efficiency of ship operations for the new polar research vessel, the RRS Sir David Attenborough and the GSGSSI fisheries patrol vessel, the MV Pharos SG. The expanded capability will ensure that BAS and GSGSSI are able to continue their world-leading interdisciplinary research and monitoring, vital to the sustainable management of this globally important wildlife haven.

Protecting the environment was a key consideration at every stage of the planning and construction process. To minimise the footprint on the seabed, the new wharf was designed as an extension to the pre-existing wharf. A new retaining wall wraps around the former structure. The new mooring platform enables much larger vessels to dock and brings resilience against sudden weather changes. The refined layout maintains safe berthing and mooring operations for vessels up to 130 metres in length. Slipway upgrades facilitate the launching of small boats in a wide variety of tidal conditions.

As Technical Advisor to BAS, Ramboll provided the initial concept design and was onsite to supervise the construction, while BAM developed the detailed designs and constructed the new facility. Turner & Townsend also provided cost management for the project.

To limit weather delay, the team developed innovative solutions such as a bespoke conveyor to backfill the new mooring platform from the shore. The construction also necessitated the close collaboration of a wide range of experts, including a specialist dive team from Marine Civil Solutions; they inspected the seabed, removed obstructions and placed precast concrete slabs and burning sheet piles underwater.

Joe Corner, Project Manager at British Antarctic Survey said: “I am really proud to be involved in managing this project, and of everyone in the team who worked so hard to create this facility.  With just a single summer season to complete the full works under challenging environmental conditions, meticulous planning and execution was required; the breeding cycle of native wildlife restricted the start date to January. With support from the UK, Holland and the Falklands Islands, the team developed detailed environmental management plans and applied innovative solutions to the challenges faced.”

Alan Roper, Site Supervisor at Ramboll said: “Like most remote projects, this unique setting brings extremes in the way of engineering challenges. Working collaboratively with the Government of South Georgia, project team and the research station’s science and operation staff, we were able to deliver the project successfully, minimising disruption to local wildlife and the everyday operations at the station.”

Daan Aldenberg, Project Manager at BAM said: “The KEP project has been a true collaboration between the Employer, GSGSSI, scientists, designers and the construction team. I’d like to acknowledge my thanks to all involved, for the support and commitment they have provided, in working together to achieve the successful construction of this infrastructure.

Everyone should take great satisfaction in completing these works safely, ahead of programme and within budget, whilst ensuring there was no impact on the environment of this unique remote location.”

Helen Havercroft, CEO of the Government of South Georgia & the South Sandwich Islands said: “Whilst I had complete trust in the onsite construction team, I had real concerns about the unpredictable weather and gusting winds that can suddenly sweep in. The safety of personnel on site was a constant worry.

”It is a credit to the skills and determination of the project management and construction teams that we are able to announce the completion of the wharf ahead of schedule.

The new wharf and slipway will be used to operate Government harbour patrol boats, rigid inflatable hull boats, scientific survey boats and workboats. As well as accommodating the RRS Sir David Attenborough, the wharf will be compatible with the GSGSSI fishery patrol vessel, MV Pharos SG, and Royal Navy ships HMS Protector and HMS Forth.

South Georgia was once ground zero of the whaling industry but now undertakes critical research at King Edward Point to support the precautionary and sustainable management of the marine environment. This remote and largely untamed UK Overseas Territory administered by the Government of South Georgia & the South Sandwich Islands has an abundance of life and opportunity for a wide range of scientific endeavour.

The only way to travel to South Georgia is by ship making the wharf development part of the lifeblood of the site; transporting cargo and welcoming visitors and scientists, who call it their home for a short period.

The project was joint funded between the partners: NERC £4million, FCO £4million (through the UK Government CSSF fund), GSGSSI £2.2million and BAS £0.8million.

The £140m Antarctic Infrastructure Modernisation (AIM) Programme forms part of Government investment to transform the UK’s Antarctic infrastructure to ensure that its facilities continue to enable frontier research. Alongside ensuring the safe and efficient berthing of the new Polar research vessel, the RRS Sir David Attenborough, the programme aims to reduce operating costs, improve efficiency and keep the research stations meeting the needs of BAS personnel to facilitate world-leading research for the future. Find out more online: https://www.bas.ac.uk/project/kep-modernisation/

The GSGSSI usually celebrates our toothfish fishery on the 4th September each year – Toothfish day. This season celebrations started early, when, on the 1st May the first vessels arrived at South Georgia for the start of the 2020 fishing season. The licenced longline vessels flagged to the UK (St Helena), New Zealand and Chile are currently participating in our MSC certified toothfish fishery following inspection by GSGSSI officials in Stanley. Getting to a point where a fishery of any sort could take place when Covid -19 has confined fishing vessels and crews to ports across the globe would have been noteworthy. Ensuring a fishery is taking place that is fully compliant with all of the required national and international regulations with no watering down of our rigorous environmental protections is something to be celebrated.

In partnership with our fishing operators, and contractors, GSGSI worked tirelessly to ensure that a fully compliant fishery could take place this season in the face of the pandemic. Ensuring the health of vessel crews, government officials and contractors, and preventing the risk of introduction of Covid 19 to South Georgia, has been the paramount concern whilst compliance has not been weakened. 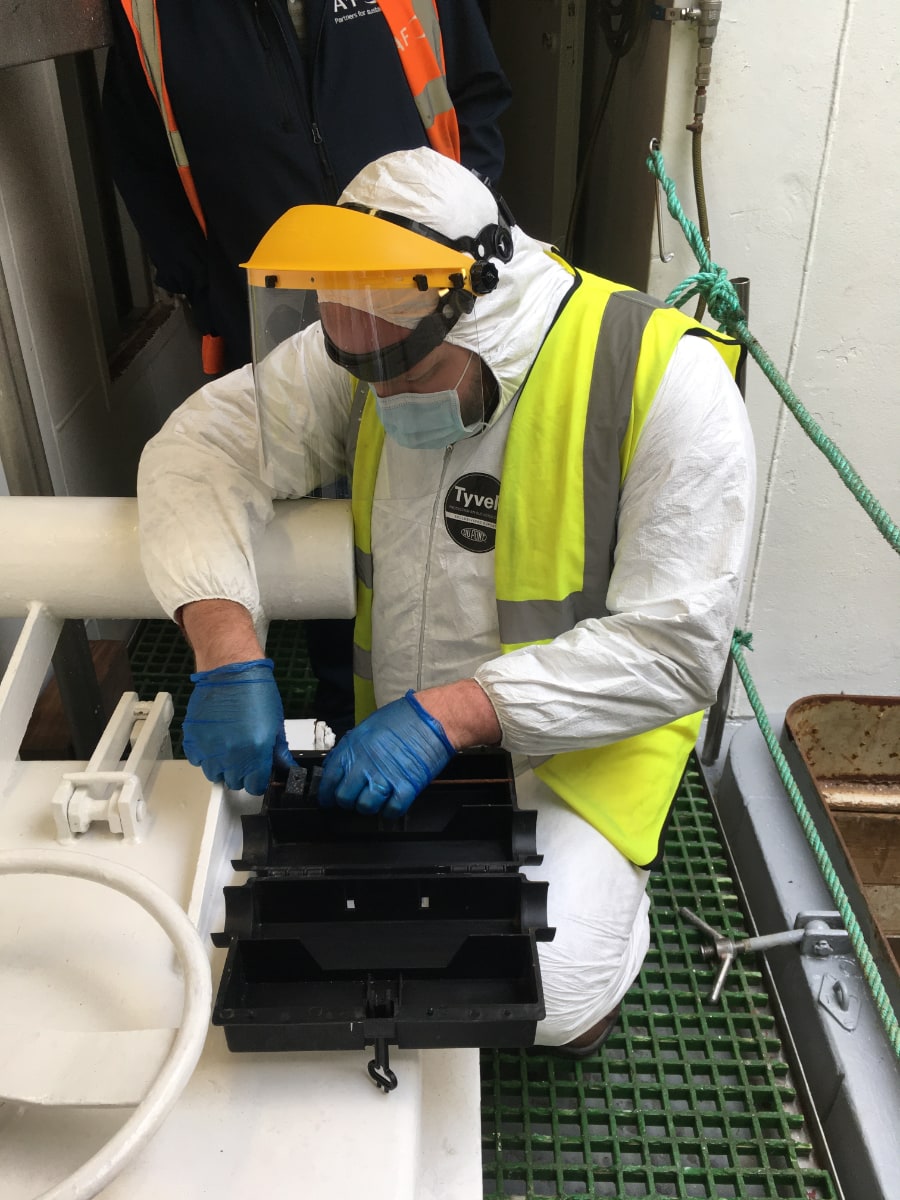 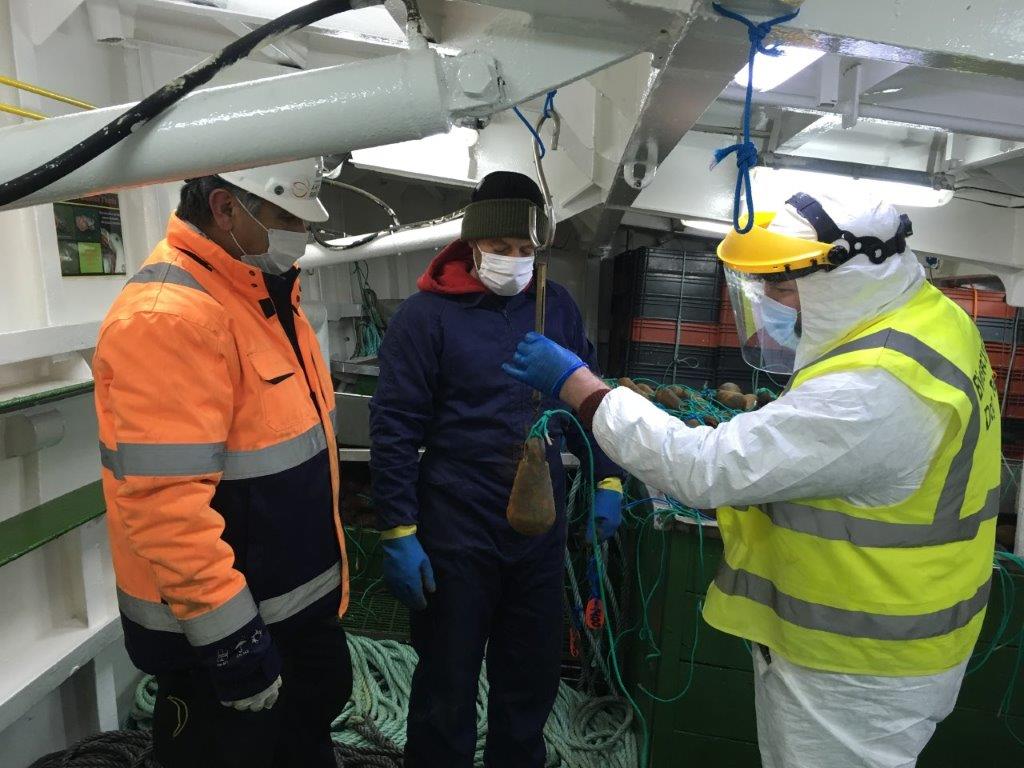 Despite the huge constraints on travel and logistics imposed by the pandemic, all fishing vessels are operating in full compliance with both SGSSI and CCAMLR regulations including the requirement to deploy an international scientific observer. In addition, to eliminate the risk of vessels re-introducing rats to the rodent-free island, all underwent a thorough biosecurity inspection in the Falkland Islands using the rodent detector dog Sammy, before departing for the fishing grounds of South Georgia.

Careful planning and cooperation with the vessel operators has ensured that our Patrol vessel Pharos SG will be operating as usual throughout the Maritime Zone during the fishing season and will be able to conduct at-sea boarding and inspections of vessels when required in a manner that ensures the safety of all involved.

South Georgia remains free of COVID-19; Grytviken closed to visitors until next August

“The tourist season is now complete and Grytviken will remain closed to visitors until at least August 2020.”

“Bird Island. An exposed, raw, isolated island in South Georgia. Although only under 5km in length and reaching 800m at its widest point, this island gets its name for a reason.”

“The island of South Georgia, between the Antarctic and the Falkland Islands, is one of the most remote places on Earth, home only to a British Antarctic Survey station and visited occasionally by tourist boats. That’s why Felicity, in Sharon Bolton’s The Split, has chosen it”

“These encouraging results come out of a Marine Protected Area (MPA) covering South Georgia and the South Sandwich Islands (SGSSI), a UK Overseas Territory in sub-Antarctic.”

“For the first time since arriving in the South Atlantic, HMS Forth crossed 850 miles of icy ocean to patrol the waters around South Georgia.”

“Two new studies by the British Antarctic Survey (BAS) are shedding new light on plastic waste in the Antarctic. Based on 30 years of extensive surveys of marine debris ingested by sea birds or washed up on Bird Island at South Georgia and Signy Island in the South Orkneys, researchers have been able to determine the source of plastics in the region and the effectiveness of mitigation efforts.”

Antarctic Penguins Poop Out So Much Laughing Gas, It Has a Funny Effect on Researchers

“While studying colonies of king penguins on the Atlantic island of South Georgia between South America and Antarctica, ‘the researchers went ‘cuckoo’ from being surrounded by penguin poop’, he said.”

“In the mid-low latitudes, our projections showed temperatures warmed towards the limits krill can tolerate. For example, by 2100 the waters during summer around South Georgia island warmed by 1.8℃.”

“In a new comprehensive study led by the British Antarctic Survey (BAS), researchers have discovered where a whale species that feeds around the sub-Antarctic island of South Georgia breeds during the winter months.” 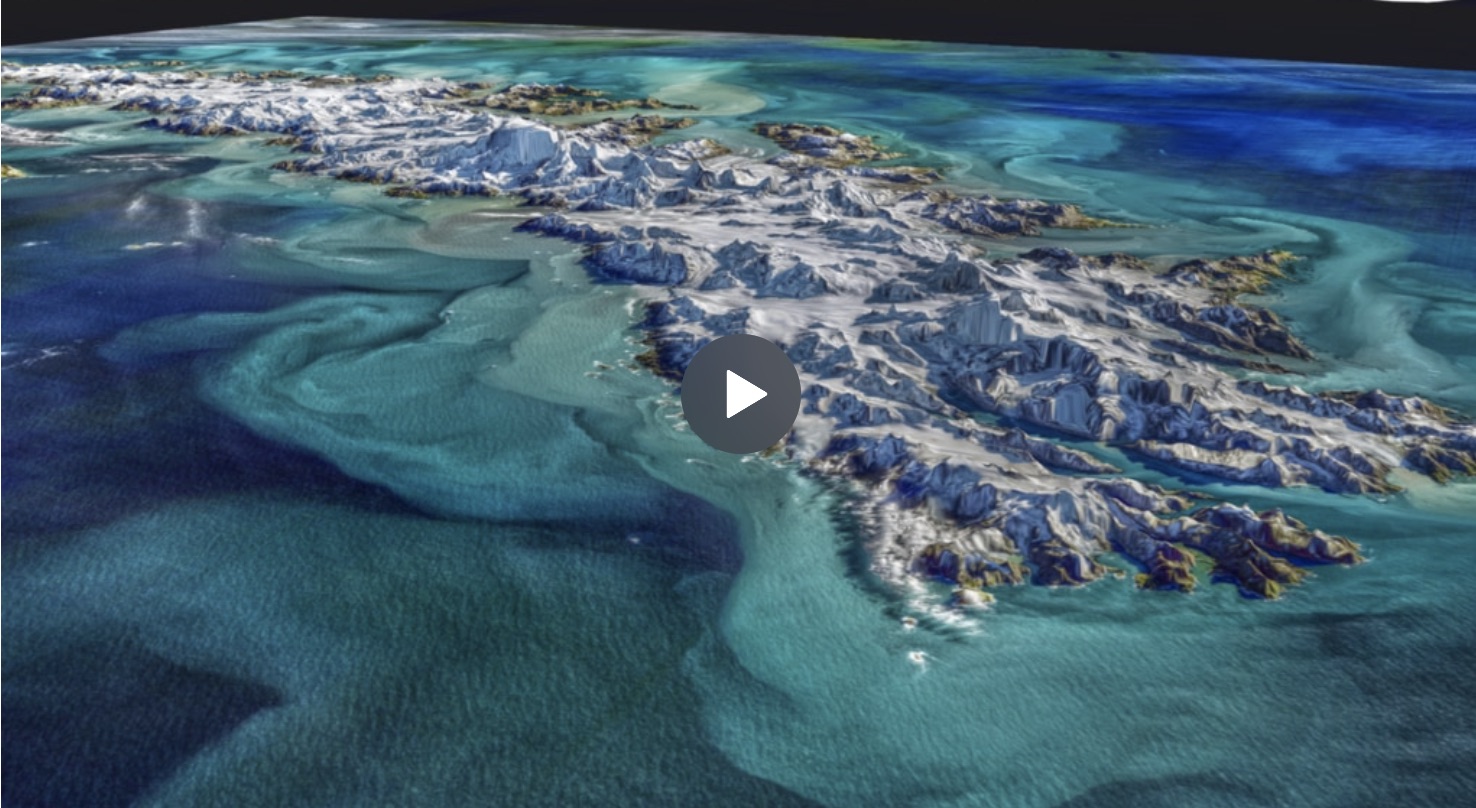 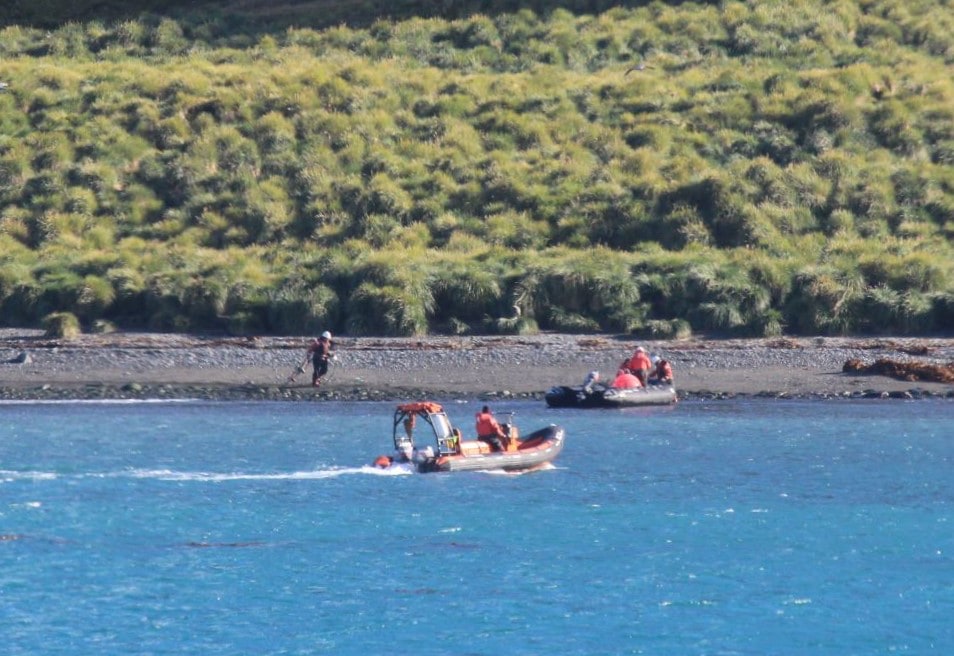 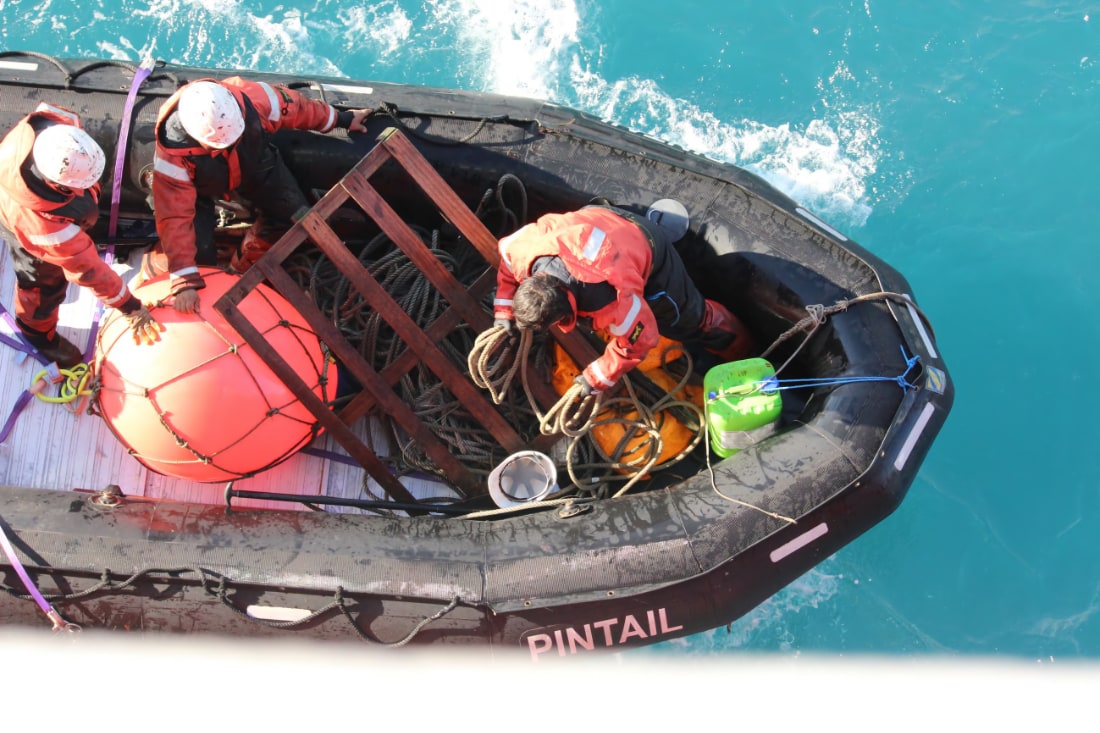 For the crew of Pharos SG, protecting South Georgia’s waters isn’t just about Fishery Patrol. At King Haakon Bay (where Shackleton landed seeking help for his marooned crew), they collect rubbish and marine plastics to keep the marine environment healthy and safe for wildlife.