The Government of South Georgia & the South Sandwich Islands (GSGSSI) has published its Annual Report 2018.

The report gives an overview of the governments principal activities in 2018 across the key areas of its strategy. It brings out the strength of collaboration to deliver on its objectives and demonstrates clearly that when working together ‘we are greater than the sum of our parts’.

Included in the report is this message from the Commissioner for South Georgia & the South Sandwich Islands, Nigel Phillips CBE:

“It is a privilege to serve as the Commissioner for South Georgia & the South Sandwich Islands (SGSSI). This jewel in the Overseas Territories crown is truly one of the most remarkable places on earth. On seeing it, one cannot help but to commit oneself to become its steward. Indeed, I could readily describe good stewardship to be not only our primary objective, but a passion every member of my team shares.

In 2018 South Georgia was declared rodent free. This incredible achievement would not have been possible without the sustained commitment and funding provided by the South Georgia Heritage Trust. Indeed, it is through working with partners like the Trust that the government leverages its effect. Another key partner is helping us to ensure the Islands remain rodent free; following a comprehensive review by GB Non-Native Species Secretariat (GBNNSS), we have identified areas where our biosecurity measures could be upgraded to ensure we remain at the forefront of best practice. Based on their recommendations, the government has decided to make permanent the extended pilot of a rodent Detector Dog Programme. Dogs are the gold standard of rodent detection and their employment is another example of the evidence- based decision making that drives government thinking.

Last year also saw intense effort in our Marine Protected Area (MPA). The culmination of the first five year independent MPA review led to a series of significant enhancements to the MPA that will further protect the Territory’s marine biodiversity and ensure our albatross, penguins and fisheries can harmoniously co-exist. But the quest for knowledge can never stand still and in early 2019 the UK Government Blue Belt Programme funded the RRS Discovery to conduct research surveys of the South Sandwich Islands. The science from these surveys will contribute evidence to the next MPA review. It is perhaps not surprising that against the background of such significant endeavour, the Marine Stewardship Council re- certified our world-class toothfish fishery with higher scores than previously. It is in keeping with the philosophy of the government that the revenue generated from the fishery is used in its entirety for the protection and further understanding of the MPA. SGSSI is absolutely not a ‘paper park’.

With the theme of stewardship running through our activities, we are looking how to manage the widely predicated growth in tourism whilst guarding against the risk of ‘loving the islands to death’. Every visitor ashore brings environmental risk, yet they are also a future ambassador for South Georgia and help fund the various conservation efforts to which the government is committed. These efforts include the National Biodiversity Action Plan, delivery against the sustainable development goals, albatross surveys, seal counting and weed eradication. The British Antarctic Survey and International Association of Antarctic Tourist Operators are among a group of key collaborators.

In closing, I am delighted that this report highlights some of the activities GSGSSI undertakes in meeting its strategic objectives. There is always more to do, but we have a brilliant team that comprises not just the eleven members of government, but all our partners, contractors and broader stakeholders. Like others who have through history visited this most special of places, we will keep pushing onward.” 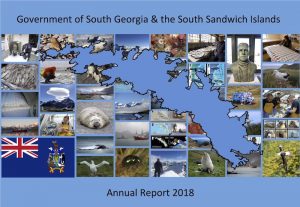 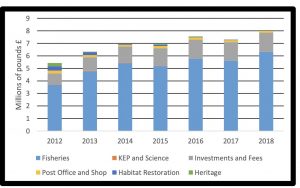 GSGSSI have published its Financial Statements to 31st December 2018.

The Financial Statements show a surplus of £1.8 for 2018, taking the General Revenue Fund to over £10m. GSGSSI have now prudently built up the General Fund to cover capital expenditure on the King Edward Point Wharf Development project and over a year’s operating expenditure. The 2018 austral summer saw significant maintenance work to the heritage assets at Grytviken and this is reflected in slightly higher operating expenditure. 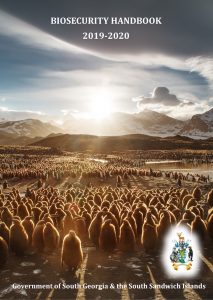 The Government of South Georgia & the South Sandwich Islands has now released the 2019-2020 Biosecurity Handbook.

Ensuring South Georgia’s biodiversity is protected from invasive species is every visitor’s responsibility, from Government employee to tourist and remains a strategic priority for GSGSSI. The Government remain constantly alert to new biosecurity threats and ensure thier policies remain up to date and reflect best practice standards. In order to achieve this, each year the Government undertake a review of biosecurity within the Territory.

This year the meetings were held in association with the Royal Botanic Gardens Kew at their Jodrell Lecture Theatre.

The morning session looked at current science and the potential for a renaissance of science across the disciplines at South Georgia and the South Sandwich Islands. A diverse range of projects were presented including glacial history, methane seeps, plant management, microbial diversity, penguin monitoring and sealing archaeology. All of the excellent speakers underscored the significance of environmental change in the region both to the challenges of effective environmental management on South Georgia and South Georgia’s global position from a Climate Change perspective. The session sparked many discussions and highlighted potential collaborations which the Government hope will be taken forward to advance the research being done at SGSSI. 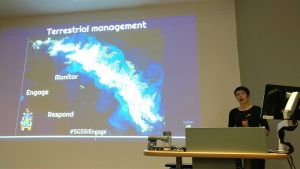 The afternoon session brought together a much wider group of stakeholders where the focus was the future management of the islands, building on the 2018 stakeholder meeting theme of good stewardship. Again, a range of fascinating speakers covered topics including changing tourism patterns, infrastructure modernisation, applications of satellite technology, and excellence in both terrestrial and marine management.

The highly successful day concluded with an informal reception where stakeholders could connect and discuss relevant issues.

Presentations from the science morning and a video of the stakeholder afternoon will shortly be available on the GSGSSI website.

Thank you to everyone who travelled far and wide to attend, present and ask questions. Details about the GSGSSI 2021-2025 strategy consultation process and how to get involved will also be shared soon.

Stakeholders catching up before the afternoon sessions

August brought the very sad news of the passing of Pauline Carr.

Pauline first arrived on South Georgia in 1992 with her husband Tim on board their 28ft yacht “Curlew”. They both instantly fell in love with the island; its wilderness and natural beauty. This passion for South Georgia ensured that it would be their home for the next 24 years before finally leaving for New Zealand in 2006. The work Pauline and Tim undertook for the Museum Trust during this time was instrumental in making the museum what it is today.

GSGSSI is very grateful for the contribution Pauline made to the islands preservation of its cultural heritage and she will be fondly remembered and missed by the many people who met her. People who passed through South Georgia on their own adventures, whether this was just a fleeting day visit or a longer summer season, will have enjoyed her company at the museum, in the hills, on skis or just relaxing having tea and cake at Drukken villa. Our thoughts are with Tim at this difficult time. 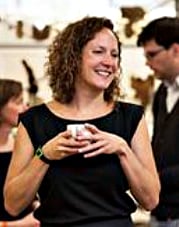 One of Jayne’s first tasks will be to consider the interpretation needed for the ground floor of Grytviken’s Main Store and its many original artefacts.

A veritable time capsule from nearly a century ago, the Main Store contains hundreds of implements used by the Grytviken community and offers a glimpse into the everyday life of the people who worked in this remote place. 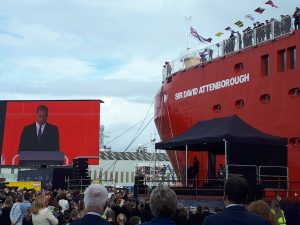 Government officials were delighted to attend the September naming ceremony of the RRS Sir David Attenborough.

Sir David himself was there – he commented “This astonishing ship… will find the science with which to deal with the problems that are facing the world today and will increasingly do so tomorrow.”

The Royal Research Ship (RRS) was commissioned to replace the RRS James Clark Ross and the RRS Ernest Shackleton, which between them have given almost 50 years’ service in support of UK polar science.

When visiting South Georgia, the RRS Sir David Attenborough will be berthed at the new 2020 King Edward Point Wharf Development.

Sailing South Georgia: The inside story of Skip Novak’s 2018 expedition

“Emboldened by success in 2016, Skip Novak sails back to South Georgia to attempt a traverse via the island’s virgin summits”

“The UK’s new £200m polar research ship has officially been named the “Sir David Attenborough” after the famous BBC broadcaster and naturalist.”

“One of the best places to look for leadership is in the explorers who have persisted through the most dire of situations—and there are few pioneers with more pluck than Sir Ernest Shackleton.”

“How tracking technology is improving our understanding of threats to seabirds”

“Endurance Estates made the presentation of a diary kept by Sir Ernest Shackleton’s geologist, Sir James Wordie, a former fellow and master of the college.”

“The ground-breaking footage was captured by a drone flying off the coast of the island of South Georgia, in the southern Atlantic.”

Snapshots from the antarctic: Carpenter’s fascinating photos of pioneering expedition to map frozen wastelands go up for auction

“The photo album includes a photo of Shackleton’s grave at the Grytviken whaling station in South Georgia following his death in 1922.” 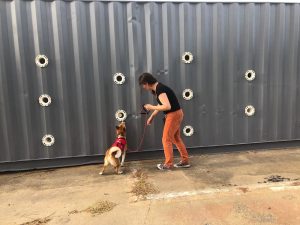 Biosecurity detector dog team training ahead of a busy season checking ships and cargo for rodents before they go to rodent-free South Georgia.

Dense tussac beds at Jason Harbour. Tussac provides a key habitat on South Georgia for a variety of wildlife. Photo by Neil Golding.