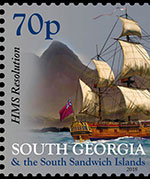 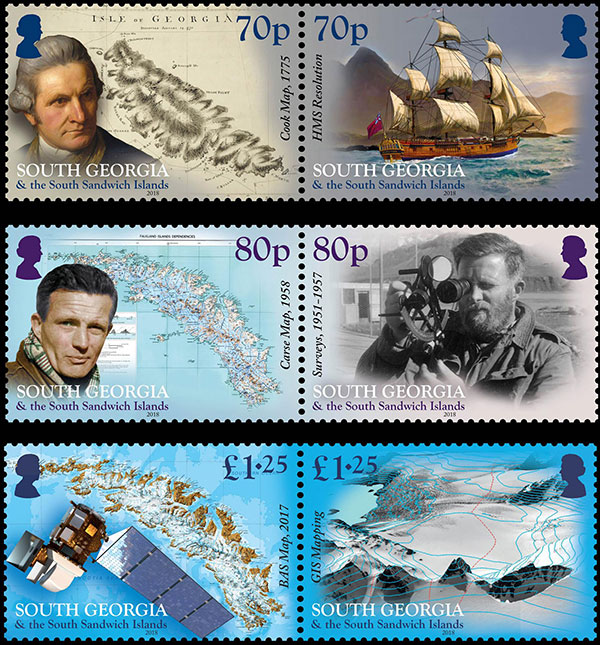 Today the Government of South Georgia & the South Sandwich Islands is delighted to launch a set of stamps celebrating the history of mapping the island.

South Georgia is a mountainous, glaciated island in the South Atlantic. It has a rugged coastline and its highest peaks reach to over 2,935 m a.s.l., 8 % of the landmass is vegetated and there are numerous offshore islands and skerries. Each year more than 8,000 visitors come to the Territory, some enjoy short walks in the spectacular coastal scenery, others undertake ambitious expeditions into the islands interior, and all rely on accurate maps.

Detailed information about our surroundings is often taken for granted but it has taken nearly 250 years to accumulate such a thorough knowledge of the landscape. This information has been hard won and has a fascinating history. The stamps released today are in the format of three se-tenant pairs each celebrating an important development in the mapping of the Territory.

70p – Cook Map 1775 and HMS Resolution
South Georgia was first sighted looming out of the stormy seas of the south Atlantic by a London merchant Anthony de la Roche in 1675. However, he did not brave a landing on the rocky shores and for a hundred years, the island remained untouched by humans. That all changed in 1775 when Captain James Cook and his ship HMS Resolution circumnavigated the island and on January 17th, made the first landing at Possession Bay, raising the British flag and claiming it for King George III. This day is now celebrated as a public holiday on South Georgia. Cook produced the first map of South Georgia and gave names to a number of features which persist to this day including Bird Island and Cumberland Bay. He also named the southernmost tip of the island ‘Cape Disappointment’ as it was at this point he realised South Georgia was an island, rather than the great southern continent that he had been searching for.

80p – Carse Map 1958 and Surveys 1951-1957
Progress in understanding the geography of South Georgia was made throughout the nineteenth and first half of the twentieth century by whalers, sealers and several expeditions including one by Russian-born Thaddeus Bellingshausen that mapped the little known south coast, and the German International Polar Year expedition in 1882-83 produced detailed maps of the Royal Bay area. However, the island’s interior was not comprehensively mapped until the 1950’s after a series of three expeditions led by Duncan Carse. Carse and thirteen men surveyed the island’s mountainous and glaciated interior using techniques that had scarcely changed since Shackleton’s era but were nonetheless extremely effective. The culmination of their work was published by the Directorate of Overseas Surveys in 1958 and remained the definitive map of the island for the next 46 years.

£1.25 – BAS map 2017 and GIS Mapping
Modern technology and the availability of satellite imagery have revolutionised mapping and mean that South Georgia can be viewed in detail like never before. Utilising images from the Digital Globe Worldview satellites which can produce images with up to 30cm resolution. Combining this with the latest photogrammetry and computer technologies means it is possible to map peaks and contours at 25 m resolution, see the precise position of lakes and streams, monitor the rate at which glaciers retreat and even differentiate types of vegetation. This work by the British Antarctic Survey MAGIC team has culminated in the production of the most recent and most comprehensive map of the island which was released in 2017. In parallel with this a Geographical Information Systems (GIS) web portal has been developed and means that anyone can access detailed maps rich with information about everything from the position of wildlife colonies to locations of historic sites.