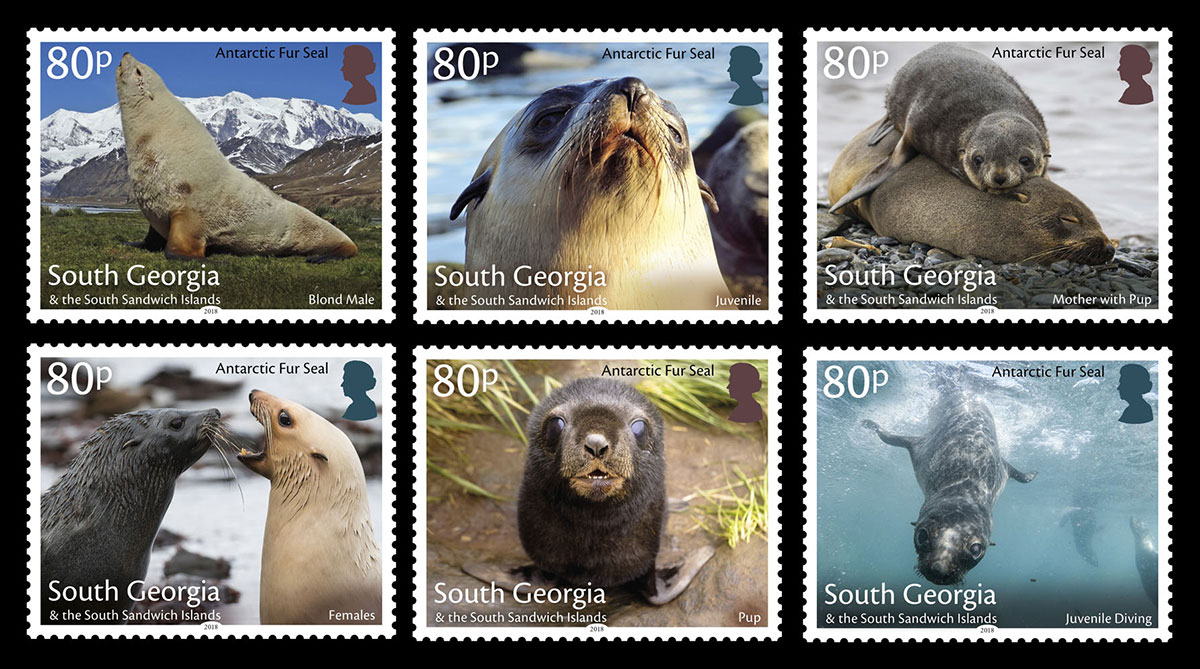 The latest release of South Georgia stamps features Antarctic fur seals both on land and in the water at different stages though their lifespan.

Antarctic fur seals are a member of the family Otariidae, or eared seals. Early explorers in the 18th century noted the abundance of fur seals on the coast of South Georgia and this soon lead to a lucrative and highly destructive industry. Sealing parties were primarily interested in the thick fur pelts and hunted seals to the brink of extinction. By the early 20th century, fur seals would have been a rare sight on South Georgia. Fur seals are now highly protected by domestic legislation, which makes it illegal to harm or disturb fur seals. International treaties, such as Convention on the International Trade in Endangered Species (CITIES), offers further protection by regulating trade of material between countries. Thankfully, populations have recovered and it is thought that nearly five million fur seals now live on South Georgia, which equates to 95% of the global population. In the summer months they are a common sight on beaches along the north coast and the air is filled with the sound of their calls.

Fur seals are easily recognised by their short snout, dark brown or grey colour and dense coats with up to 60,000 hairs per square cm, which keeps the animals warm. Around 1 in 1,000 fur seals are an unusual ‘blond’ variant, which certainly makes them stand out from the crowd. Males in prime breeding condition can reach 2 m in length and weigh more than 200 kg. In contrast, females are much smaller and are typically less than 1 m in length weighing in at less than 50 kg.

Generally, fur seals are anti-social and adults are wary of both other seals and humans, becoming hostile if they feel threatened. Although most at home in the water, fur seals can move surprisingly quickly on land and visitors are advised to exercise caution especially during the breeding season. Signs that seals are becoming distressed include changes in posture from lying to sitting, snorting or whimpering noises and aggressive displays such as charging. In contrast to adults, pups appear to relish company of other seals and when their mothers are away at sea they often form gangs that play on beaches and in sheltered pools. For many, observing the antics of fur seals going about their daily lives is a highlight of a trip to South Georgia. To make the most of a visit to a fur seal beach it is best to keep on the landward side of seals to avoid blocking their escape to the sea, move slowly and carefully and not to make loud noises, which may cause alarm.

The fur seal breeding season begins towards the end of October when males that have been away feeding at sea over winter return to the beaches to wait for the females who come ashore around a month later. Soon after arrival, the females give birth to a single pup that they have been carrying for nearly a year. Just 7 to 10 days later they are ready to mate again. Males hold a harem that can be in excess 20 females, and are highly territorial during this period. If another male strays onto a rival’s territory fierce battles, which can result in serious injury or even death, can ensue. As a result of these violent exchanges, the males usually only live for around 15 years, whereas females can live for up to 25 years. Mothers feed their pups on a diet of rich milk and they are weaned at around 4 months. Thereafter they head out to sea with the juveniles returning to shore only occasionally before being ready to breed at around two years of age.

South Georgia fur seals mainly feed on a diet of krill and typically make short dives down to depths of around 60 m in order to find their prey. During the winter months, fur seals can range over large distances in search of food, but during the summer months when females are supporting their pups, foraging trips are typically shorter and closer to the shore. On South Georgia, this important food source is protected in a sustainable use Marine Protected Area that covers the entire 200 nm Maritime Zone. In this area, all fishing activity is carefully regulated to the highest standards to ensure sustainability. To ensure that mothers with pups have easy access to the best food sources, all fishing activity within 12 nm of land is prohibited and during the summer months there is a complete ban on krill fishing anywhere in the Maritime Zone. It is hoped that through continued careful management of the environment and protection of important food sources, this iconic and charismatic species will continue to thrive and be enjoyed for generations to come.