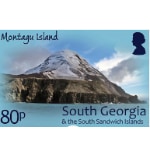 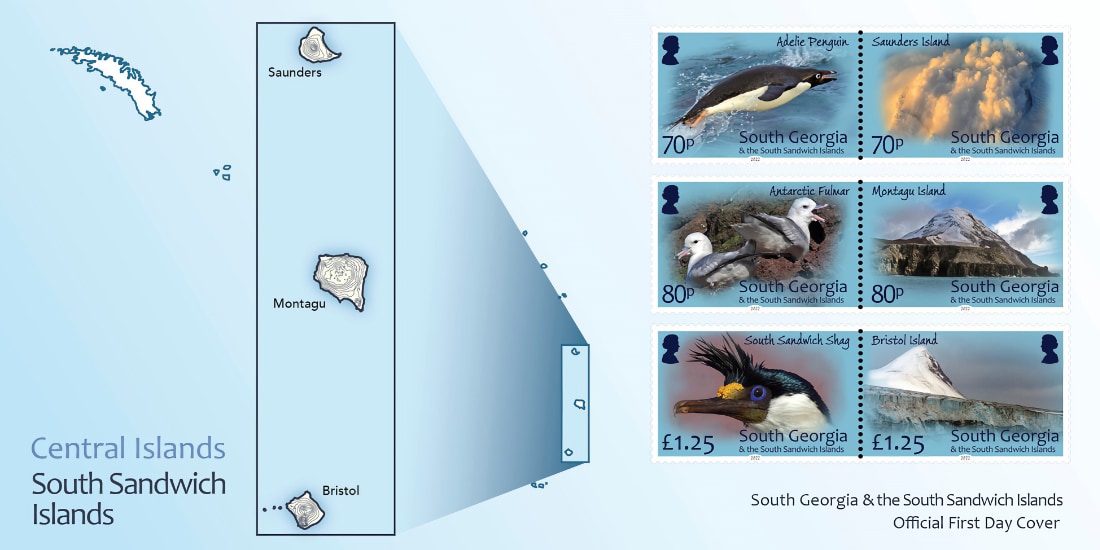 The South Sandwich Islands are a string of eleven volcanic islands and rocks located approximately 500 km to the south east of South Georgia. The island chain stretches for over 400 km in a north to south direction. From north to south they are Zavodovski, Leskov, Visokoi, Candlemas, Vindication, Saunders, Montagu, Bristol, Bellingshausen, Cook and Thule.  The South Sandwich Islands range in size from the largest, Montague, at 110 km2 to the smallest, Leskov, at 0.3 km2. To the east of the islands lies the South Sandwich Trench, which plumets to a depth of more than 8000 m and is the deepest point in the Southern Ocean and South Atlantic.

The South Sandwich Islands were first discovered by Captain James Cook in 1775. Thick fog and snow storms made exploration difficult but out of the gloom Cook noted eight rocky masses he thought could be islands or headlands on a distant continent. The conditions made navigation extremally dangerous and so Cook did not explore in detail or land on the islands. The region was next visited in 1819 by the Russian explorer Fabian von Bellingshausen who was able to explore more thoroughly and confirm the rocky masses seen by Cook were indeed islands and there were three further to the north making 11 in total.

In winter, the islands are enveloped by sea ice and remain difficult to access in summer due to the mountainous seas which surround them. As such they are rarely visited by humans and remain in pristine isolation. In 2022, the whole island chain was declared a Specially Protected Area by the Government of South Georgia & the South Sandwich Islands.

The island chain can be divided up into four island groups, each of which will be celebrated in this series of stamps. Each island will be represented with a pair of stamps; one features an example of the wildlife that occurs there and the other a striking landscape feature of the island.

This second set in the series features the central islands which consists of the islands of Bristol, Montague and Saunders.

Discovered in 1775 by Captain Cook and named for Sir Charles Saunders, Saunders Island is dominated by Mount Michael that rises to 990 m.a.s.l.  Like all the South Sandwich Islands, the island is highly volcanic and there have been multiple eruptions since 2000. Notably at the 700 m.a.s.l summit of Mt Michael is a lava lake which is thought to be one of only eight in the world.

Adelie penguins are found across the Antarctic continent and at the islands in the southern part of the South Sandwich chain. Feeding predominantly on krill, they thrive in the cold southern waters. Returning to land to breed, they require rocky rather than ice bound nest sites and are known their ability to make athletic leaps of up to three metres out of the water when coming ashore at rocky cliffs in tumultuous seas.

Named for John Montague, the 4th Earl of Sandwich, Montagu is the largest of the South Sandwich Islands. With most of the surface covered with snow and ice, it is dominated by Mount Belinda which rises to 1,370 m.a.s.l. In 2005 an eruption which originated underneath the ice-sheet created a 90m wide lava river which extended the northern reaches of the island by 0.2 square km.

Antarctic Fulmars are ubiquitous on all islands in the chain except Zavodovski. Breeding on steep slopes and cliff edges they lay a single egg which both parents take turns incubating and protecting from predatory skuas. The genus name (Fulmarus) comes from a Norse term meaning ‘foul gull’ because of the habit of ejecting foul-smelling oil on would be predators as a defence mechanism.

Named for the 3rd Earl of Bristol, the island is the only landmass which lies directly on the 59th parallel south. Like all the islands in the chain it is strongly volcanic. A large eruption was detected by satellite imagery at Mount Sourabaya in 2016. The shape of the thermal anomaly was suggestive of lave breaching the crater rim.

Similar in appearance to the blue-eyed shag, the South Sandwich Shag is present in small numbers around the coasts of many islands. Bristol Island is home to one of the largest colonies of this species on the South Sandwich Islands, with over 100 nests. Feeding on fish they can dive to depths of up to 100 m and often form a ‘raft’ of multiple birds, diving in turns which panics the fish and makes them easier to catch.