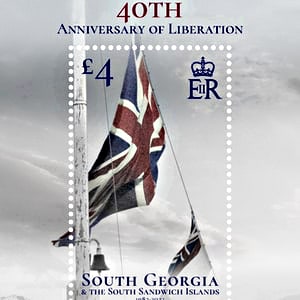 The conflict on South Georgia was precipitated on 19th March when military personnel posing as scrap metal workers landed at Leith Harbour and raised the Argentine flag. Following protests by the British, the flag was eventually lowered and the Captain of the support vessel Bahia Buen Suceso was ordered to report to the administrative centre of Grytviken. However, the vessel did not arrive.

HMS Endurance with detachment of 22 Royal Marines was dispatched to the Territory shortly afterwards. Argentina countered this by dispatching two corvettes to the region along with the Antarctic Survey ship ARA Bahia Paraiso. Over the next few weeks, a series of diplomatic efforts were made by both sides, concluding with an invasion of the Falkland Islands, 800 miles to the northwest.

Matters on South Georgia came to a head when an Argentine corvette ARA Guerrico, equipped with two helicopters and carrying 40 marines arrived in the Territory. On 3rd April, Argentina demanded the British surrender and, after a short battle during which one Argentine helicopter was shot down, the invading forces took control of Grytviken.

The British swiftly put in place plans to liberate South Georgia, using the code name ‘Operation Paraquet’. The task group consisted of Royal Marines from M Company 42 Commando who were embarked on the tanker RFA Tidespring, 2 Troop Special Boat Section (SBS), and the Mountain and Boat Troops from D Squadron Special Air Service (SAS) on the frigate HMS Plymouth, with the rest of D Squadron on HMS Antrim. This task group was commanded by Captain Brian Young of HMS Antrim and the Landing Force Commander was Major Guy Sheridan Royal Marines.

The task group met with HMS Endurance on 13th April and planning began to reconnoitre Argentine positions. 2 SBS were successfully put ashore at Hound Bay and accessed Sorling Valley and Dartmouth Point, but attempts to access the area of Leith via the Fortuna glacier led to the loss of two Wessex helicopters during extraction of the Mountain Troop. Despite this setback, during the night of 22nd April HMS Antrim successfully landed a party of SAS from boat troop on Grass Island to reconnoitred the Leith and Stromness Bay area.

On 23rd April, the British received intelligence that the submarine ARA Santa Fe was approaching South Georgia with reinforcements. The Santa Fe successfully landed these troops at Grytviken in the early hours of 25th April. The submarine departed King Edward Point on the surface and was engaged with depth charges by HMS Antrim’s Wessex helicopter.

At 1415 the first wave of troops boarded helicopters and, shortly afterwards, landed on the flat expanse of Hestersletten and advanced towards Grytviken via Brown Mountain. Meanwhile, HMS Antrim and HMS Plymouth conducted sustained bombardments of the area.

The news that South Georgia had been Liberated was signalled back to the UK with a now famous message from Captain Young:

“Be pleased to inform Her Majesty that the White Ensign flies alongside the Union Jack in South Georgia. God save the Queen”

The only fatality of the Liberation of South Georgia was Felix Artuso, a crewman aboard Santa Fe who died 26th April. He is buried at Grytviken Cemetery and the GSGSSI maintains his grave.

In the years following the conflict, South Georgia & the South Sandwich Islands became a separate British Overseas Territory, distinct from the Falkland Islands, with a permanent armed forces presence. In 1991 a civilian presence was re-established with Government Officials undertaking fisheries and customs duties, and in 2001 the military garrison was fully withdrawn and the British Antarctic Survey took over management of scientific operations at King Edward Point.

Since that time, the Territory has been managed primarily for its environmental significance and as a tourism destination. The legacy of peace delivered in 1982 has allowed the Government of South Georgia & the South Sandwich Islands to invest heavily in scientific research to inform world leading, evidence-based, sustainable management that continues to deliver globally significant environmental recovery.

To mark this anniversary, today, GSGSSI is releasing a new stamp set. The image on the souvenir sheet features Royal Navy Officers raising the white ensign alongside a union jack in the days following the Liberation of South Georgia.

More information on the stamps can be found at www.pobjoystamps.com and the stamps are available to purchase in person at the Grytviken Post Office, or online through https://www.falklandstamps.com