The Government of South Georgia & the South Sandwich Islands (GSGSSI) is delighted to announce the launch of its latest stamp issue ‘Albatross Conservation’. The stamps have been developed in conjunction with the Royal Society for the Protection of Birds (RSPB) to raise awareness about the conservation status of South Georgia albatross and the joint work being undertaken to better understand and protect these iconic birds.

A recent archipelago-wide surveys conducted by GSGSSI revealed that the number of wandering albatrosses breeding annually at South Georgia decreased by 18% (1.8% per year) between 2003/04 and 2014/15 and over the same period black-browed and grey-headed albatrosses decreased by 19% (1.9% per year) and 43% (5% per year), respectively.

Through the strict implementation of various conservation measures including bird-scaring devices and night setting the mortality of albatross in South Georgia waters has been reduced to zero. Incidental mortality associated with fisheries operating outside of South Georgia’s maritime zone is still high and thought to be the main cause of the recent population declines. Targeted international education and monitoring programmes are required to improve the conservation status of these iconic species. GSGSSI and RSPB have committed to work together to better understand and address the threats posed to South Georgia albatross with an initial study to identify where albatross are most at risk is well underway. Early results indicate hotspots of overlap with pelagic longline fisheries during winter months (May-Sep). Hotspots for wandering and grey-headed albatrosses include the south-west Atlantic and south-west Indian Oceans, as well as east of New Zealand, while black-browed albatrosses are particularly concentrated in the Benguela Upwelling during the winter months.

Proceeds from the sale of the stamps will be used to fund albatross conservation initiatives. The stamps can be purchased online through Falklands Post Service Ltd (www.falklandstamps.com) or through the RSPB via eBay (use the advanced search function on eBay to search for RSPB). 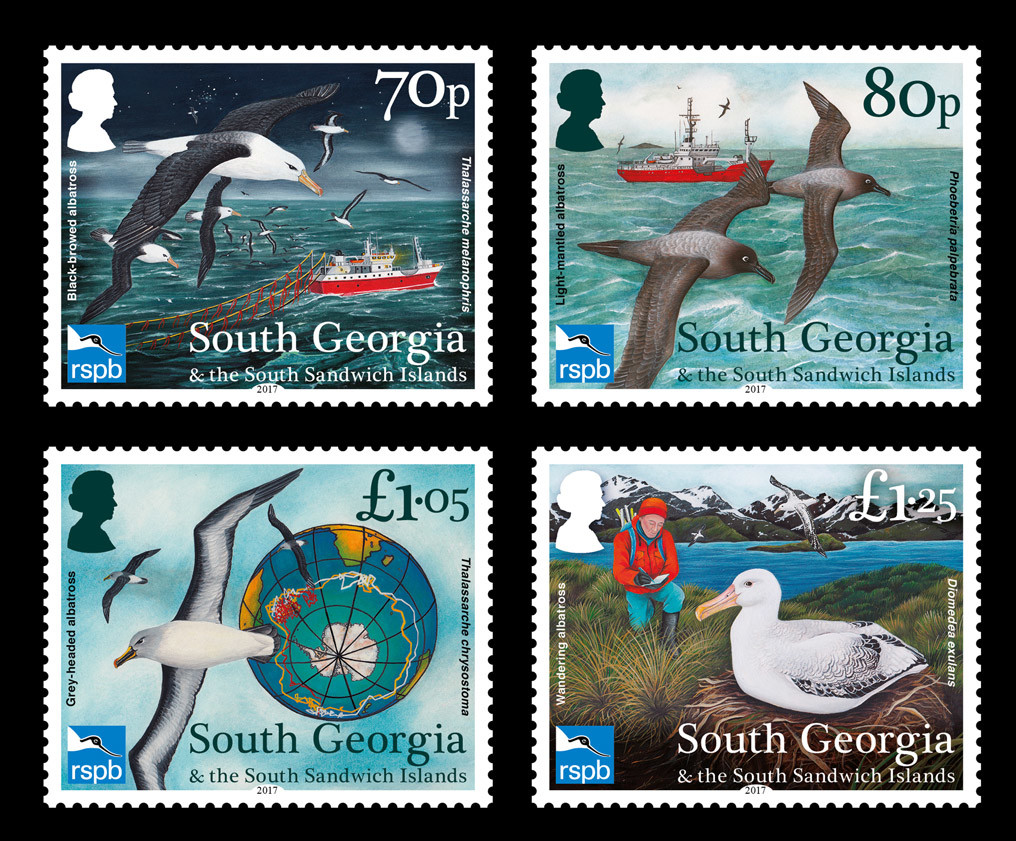 Each stamp features a species of albatross which breeds on South Georgia and highlights an important conservation issue. Artwork was done by Leigh-Anne Wolfaardt.

Breeding on inaccessible cliffs and tussock covered slopes, these birds are generally surveyed by photographing colonies from the sea, and subsequently counting nesting birds from the digital photographs. Outside the breeding season the birds spend considerable time foraging in the productive waters of the Benguela Current, off southern Africa where they overlap with, and are at risk of being incidentally killed by a number of long-line and trawl fisheries.

Often found nesting on high cliffs in mixed groups with black-browed albatross, grey-headed albatrosses only breed every other year making their populations particularly vulnerable to ongoing declines. Known to travel great distances outside of the breeding season, better understanding of where these birds forage at different stages of their life-cycle is critical to understanding what fisheries they come into contact with and where to target conservation efforts.

Wandering albatrosses are one of the largest flying birds in the world and have a wingspan of up to 3.5m. It takes an entire year to raise a chick. Nesting in small groups on isolated headlands and tussock islands, the majority of birds breeding at South Georgia are found on Bird Island and Annenkov Island, with other colonies located in the Bay of Isles and along the southern coast of the archipelago. Surveying these long-lived species requires good local knowledge and great care to avoid disturbing the birds or the habitat in which they nest.