Centenary of The Death of Sir Ernest Shackleton

Today it is 100 years since the death of Sir Ernest Shackleton. To mark this occasion, South Georgia & the South Sandwich Islands, the British Antarctic Territory and the Falkland Islands, have joined together to release a series of stamps celebrating his life and achievements. 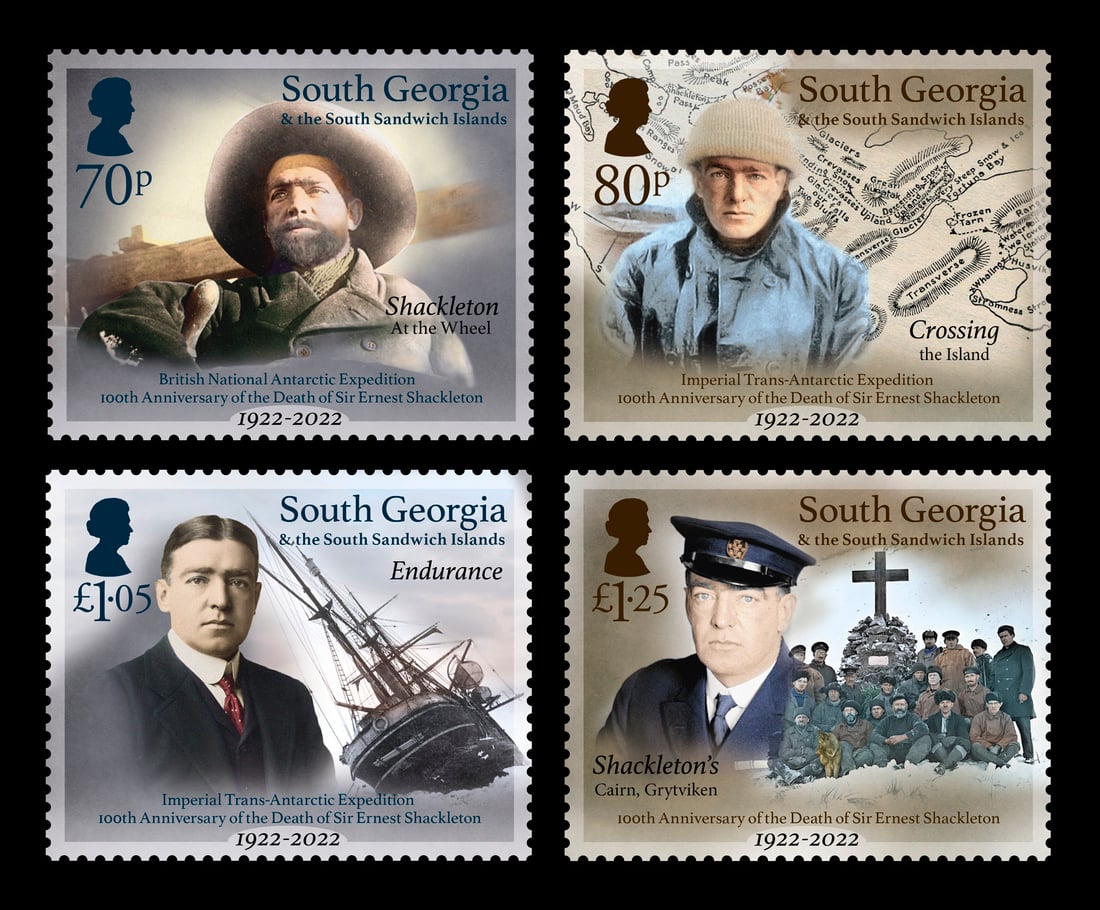 Shackleton rose to fame in 1915 when his vessel, the Endurance, became trapped in pack ice and sank. Against all the odds, Shackleton succeeded in getting all his men back to safety, a tale of resolve and selfless leadership that is celebrated as one of the greatest stories of human endeavour.

Shackleton led three major expeditions during what is now known as the Heroic Age of Antarctic Exploration. His first journey south was in 1901, on the Antarctic expedition ship Discovery. Led by British naval officer Robert Falcon Scott, Shackleton and Edward Wilson trekked towards the pursuit for the South Pole in extremely difficult conditions. They got closer to the Pole than anyone previously.

In 1908, Shackleton returned to the Antarctic as the leader of his own expedition, on the ship Nimrod. They made many important scientific and geographical discoveries and set a new record by getting even closer to the South Pole. He was knighted on his return to Britain. The race for the South Pole ended in 1911 with Amundsen’s conquest and in 1914 Shackleton made his third, now well-known expedition, with the shipEndurance.

In 1921, Shackleton returned to the sub-Antarctic on the Shackleton-Rowett Antarctic Expedition. More commonly known as the Quest expedition, it was to be Shackleton’s fourth and final expedition. Large crowds gathered as the ship, Quest, left St Katherine Docks in London on 17 September 1921, with a crew comprising eight shipmates from the famous Endurance Expedition, keen to return to southern waters.

After arriving at the quiet waters of King Edward Cove in South Georgia, Shackleton unexpectedly died in the early hours of the morning on the 5th January 1922.

‘A wonderful evening. In the darkening twilight I saw a lone star hover, gem-like above the bay.’

Shackleton was buried on the 5 of March at the whaling station, Grytviken, a ceremony attended by the managers of the five stations on South Georgia and a hundred whalers and seamen.

A hiatus followed the return of Quest, with no significant expeditions to the Antarctic for another seven years. The Shackleton-Rowett Antarctic Expedition is remembered for the untimely death of its leader but also the end of the Heroic Age of Antarctic Exploration.

South Georgia was a fitting location for the end of a heroic story. Shackleton’s sudden death created a dramatic, if premature, finale. His death caused an outpouring of grief throughout the world with a sense of loss that still resonates today. Many visitors make the pilgrimage to South Georgia to visit the last resting place of Shackleton and toast “The Boss”.

The Quest ship doctor, Alexander Macklin recorded in his diary, ‘I think this is as the boss would have had it himself, standing lonely on an island far from civilization, surrounded by a stormy tempestuous sea, and in the vicinity of one of his greatest exploits.’

A century after his death his fame continues, yet his popularity is a relatively modern phenomenon. From 1980’s onwards various biographies and historic accounts of the polar expeditions saw Shackleton catapulted to stardom, something that was fleeting in his lifetime.

The events of the Endurance Expedition drew a new generation of followers seeking inspiration from the epic adventure and from Shackleton’s leadership style. Shackleton’s ability to overcome adversity, retain the loyalty of his men, and his extraordinary and ultimately successful efforts to rescue his Endurance crewmates still inspires people today.

The story of the Endurance Expedition has become legendary. His decision-making and guidance under pressure is celebrated in books, management courses, films, television and memorials today.  A portrait of him by Reginald Grenville Eves hangs in the National Portrait Gallery, London. Statues and busts of Shackleton can be seen outside of the Royal Geographical Society, London, at Athy, his birthplace in Ireland, and in the Church at Grytviken, South Georgia where he died.

In his own lifetime Sir Ernest Shackleton had won world renown as an intrepid Antarctic explorer. One hundred years later, tales of the explorer still capture the imagination and the enduring qualities that made Shackleton such a revered figure in polar world history ensure his continued appeal. As Apsley Cherry-Garrard, of Scott’s last expedition, wrote shortly after Shackleton’s death:

‘If I am in a devil of a hole and want to get out of it give me Shackleton every time.’

With thanks to Jayne Pierce, South Georgia Museum for the text.