Today the Government of South Georgia & the South Sandwich Islands releases a new stamp set to honour the duty and sacrifice shown by Shackleton’s men during the First World War. 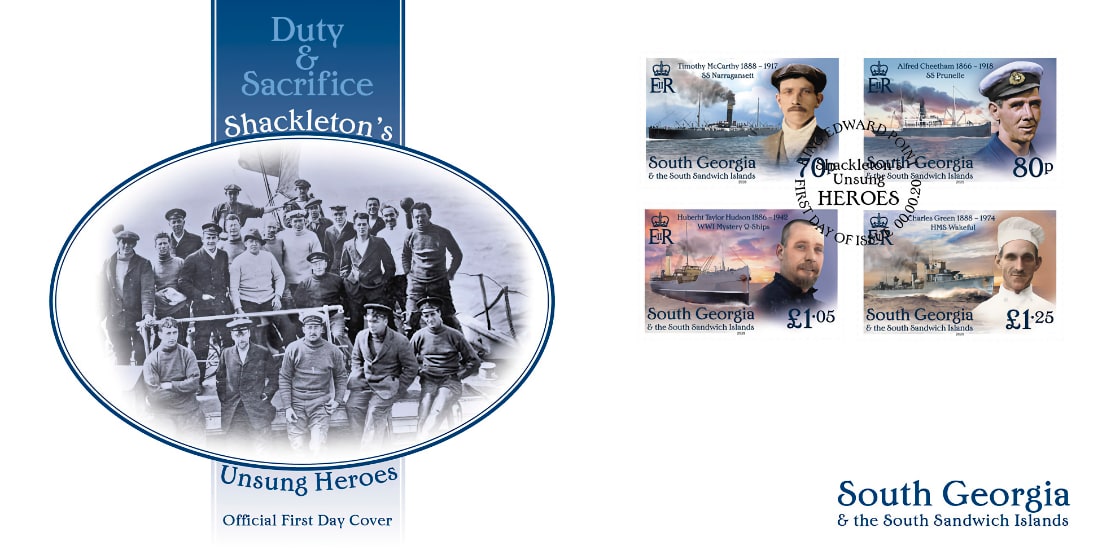 The story of Shackleton and his men is the stuff of legend. In 1915, with the loss of his vessel Endurance during the Imperial-Trans Antarctic Expedition there followed a story of survival, bravery and determination famed throughout the world. Shackleton and five of his men undertook an epic open boat journey across the Southern Ocean and the first ever overland crossing of South Georgia in order to raise the alarm and send help to crew members who were left behind battling for survival on Elephant Island. Famously, all of Shackleton’s men survived. Each individual stepped up where they had the skills and strength to do so, but also had the courage to put aside their ego and acknowledge weakness so as not to endanger their crew mates.

On their return to England in 1917 the First World War was raging. Despite knowing they may be called upon to make the ultimate sacrifice, Shackleton’s men did what they considered to be their duty and signed up to help the war effort. Whilst a handful of those men were recognised for specific acts of gallantry, previously recognised on a South Georgia stamp edition in 2019, most simply displayed the same selfless resolve they showed during the Endurance expedition. They were in effect Shackleton’s unsung heroes.

McCarthy was an able seaman during the Endurance Expedition and due to his skills and resilience was one of the five men who accompanied Shackleton on the rescue mission to South Georgia.

Immediately on return to England, he signed up to the war effort as part of the Royal Navy Reserve and was deployed as a leading seaman on SS Narragansett. On transit between the south-west coast of Ireland and the Scilly Isles the vessel was torpedoed and he, along with all other 45 hands on board were killed. He was the first of the Endurance crew members to die in the war, just three weeks after returning from the expedition.

Cheetham was already an Antarctic veteran by the time he was serving as third officer on the Endurance having previously served as part of the Discovery and Terra Nova Expeditions. Worsley referred to him as “a pirate to his fingertips” and his cheerful disposition made him an invaluable boost to morale for the men left on Elephant Island.

On return to England, Cheetham learned that one of his sons had died serving on RMS Adriatic. Despite this personal tragedy, Cheetham enlisted in the Mercantile Marine and served aboard SS Prunelle. Just 2 miles from the safety of port, the vessel was targeted by a German submarine SM UB-112. The ensuing explosion sank the ship, killing 12 of the 16 crew, including Cheetham.

Hudson was a navigating officer in the Royal Navy who took part in the Endurance expedition as a mate. Able to turn his hand to many skills, Hudson proved an invaluable team member due to his ability to catch penguins for food whilst the party were trapped in the ice. The trials of the expedition took its toll on Hudson and by the time the party were rescued from Elephant Island he was in poor mental and physical health.

Nevertheless, Hudson also signed up to help the war effort and served on the ‘Mystery Q-ships’. These heavily armed merchant vessels had concealed weaponry and were designed as decoy vessels to lure enemy submarines into making surface attacks. Hudson survived WWI and such was his sense of duty that he later served in WWII as a Royal Navy Reserve Commodore when in 1942 he died when his vessel Pelayo was torpedoed by U-552.

Son of a master baker, Green ran away from home at 22 to join the Merchant Navy.  When in Buenos Aires, after hearing that Shackleton had fired his cook for drunkenness, Green signed up for the Endurance expedition. Working day and night in the galley whilst at sea, and continuing to cook for his crew mates when stranded on the pack ice, a few days after arrival on Elephant Island, Green collapsed from exhaustion.

When back in England he enlisted in the Royal Navy and continued to serve his country in the best way he knew how – as a cook. During WWI he served on the Destroyer HMS Wakeful and was injured when the vessel was attacked. He re-joined the Merchant Navy in 1919 and served on a range of ships until retirement in 1931. During WWII he continued to do his duty and worked as a Fire Watcher in the city of Hull. Green died in 1974 at the age of 85.  He was one of last members of the Endurance crew to pass away.