On 18 May 2018, South Georgia was declared free from rats and mice. This incredible milestone for South Georgia’s ecology was made a reality following an eradication project of enormous scale, led by the South Georgia Heritage Trust and supported by GSGSSI.

Rodents were likely introduced to South Georgia with the first sealing expeditions. As human exploration and exploitation on South Georgia prospered, and shore-based whaling and sealing camps were established throughout much of the northern and south-western coast, rats spread to infest nearly two thirds of the island’s coastline while mice were known to be present in just two areas on south-western coast.

Rats and mice eat the eggs and chicks of many ground-nesting bird species. As a result, over the last two centuries there had been severe declines in ground nesting birds in many areas of South Georgia. The endemic South Georgia pintail struggled to breed and the South Georgia pipit, which had once bred throughout the island, was under threat of extinction. South Georgia’s seabird populations, including many species of prion and petrel, had been impacted by rats. 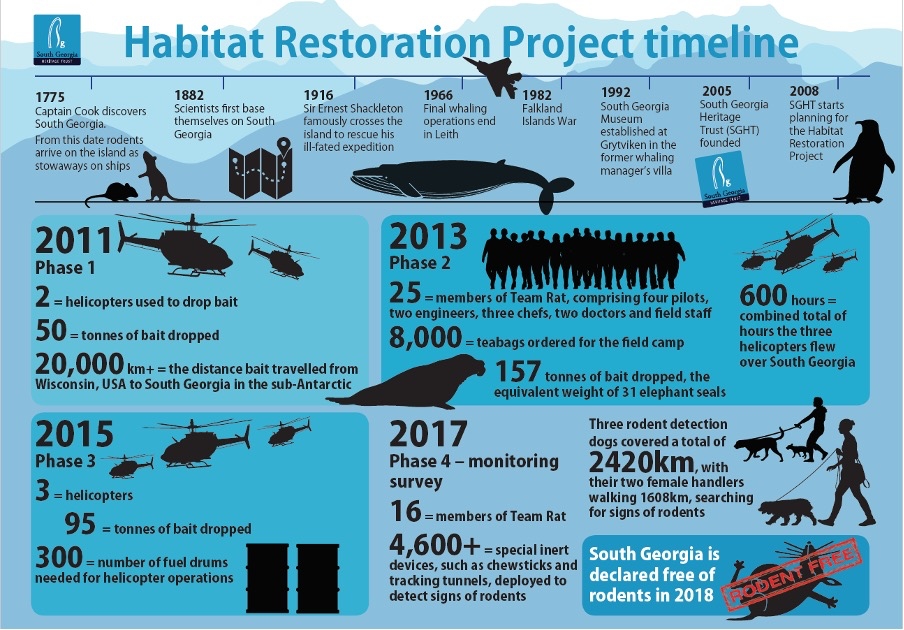 In 2011, 2013 and 2015 three phases of baiting were conducted to counter the invasive threat, mainly using aerial baiting by three helicopters alongside hand baiting inside former whaling stations.

As part of phase II of the operation, an attempt was made to eradicate mice. To take into account the biology and feeding ecology of mice, the bait pellet size, active ingredient concentration and density at which it was spread was tailored for maximum chances of success. The baited area was over 49 ha, meaning this was the largest mouse eradication ever attempted.

In 2017-18, more than two years after the last baiting work, an expedition team dubbed ‘Team Rat’ spent six months on South Georgia in the final phase of the project, searching for any signs of surviving rats using a combination of detection methods. Over 4,600 inert devices, including chewsticks and tracking tunnels, were deployed and checked as part of the survey. Three specially trained rodent detection dogs and their handlers provided a belt and braces approach, ensuring that no rodent sign was missed.

This comprehensive survey uncovered no sign of rodents. Instead, evidence abounded that the native South Georgia pintail and South Georgia pipit were making a dramatic recovery.

Today, we protect this legacy of recovery with one of the most robust biosecurity systems in the world, an integral part of which is our Biosecurity Dog Programme. The dog team is tasked to check vessels and cargo for rodents, and therefore reduce the risk of rodents finding their way back to South Georgia.

What has been achieved on South Georgia

At over 100,000 hectares in size, the area of South Georgia cleared of invasive rodents is more than 8 times larger than on Macquarie Island (Australia), which at 12,780 hectares was the largest island cleared of rodents previously. The first phase of baiting alone – completed in just 28 days despite the harsh sub-Antarctic conditions – already made this project the largest island rodent eradication operation ever undertaken in the world.
The project followed a decade of fundraising by the South Georgia Heritage Trust and its USA affiliate the Friends of South Georgia Island, raising the £10 million needed to deliver the project.

South Georgia is of global importance to seabirds and nature more widely. We hope the results from this project will continue to inspire others to help protect our natural world.

Detailed documentation for all four phases of the SGHT rodent eradication can be downloaded from here.