The South Georgia Maritime Zone covers more than one million square kilometres. It is home to some of the best managed, most sustainable, fisheries in the world. The Government oversees all commercial fishing within the zone and has a dedicated Fisheries Patrol Vessel operating year round to ensure that no illegal fishing occurs. In the face of overfishing and growing demand for food worldwide, South Georgia offers a model for how fishers, conservation NGOs, scientists and Governments can work together to deliver sustainable fisheries and environmental protection. The Government is continually reviewing its management practices. Here is a summary of what we do:

Patagonian toothfish (Dissostichus Eleginoides) live predominantly around sub-Antarctic islands like South Georgia. It is a slow-growing, long-lived species. In 2004, the South Georgia toothfish fishery became the world’s first toothfish fishery to be certified as sustainable by the MSC. The fishery was recertified by the MSC without conditions in 2009 and 2014, scoring 96 out of 100 against the three MSC principles, making it one of the world’s highest-scoring fisheries assessed against MSC standards. Other toothfish fisheries in the Southern Ocean have since followed this lead.

Amongst the mitigation measures used to reduce to near zero seabird mortality in the South Georgia toothfish fishery are:

In 2018, the Government increased the duration of licences in the toothfish fishery, following consultation with stakeholders, from 2 years to 4 years.  Among other things this seeks to:

The Government operates an open application process for licences and competition for licences is always high.  All applications are assessed carefully against a set of published, transparent, criteria, and licences are awarded to the highest-scoring applicants, subject to and in accordance with any foreign policy advice from the UK Foreign & Commonwealth Office.

In early 2018 the Government fixed the quota for the 2018 season at 2,170 tonnes and issued 4-year licences to six vessels. Of these six vessels, three are flagged to UK Overseas Territories. The others are flagged to Chile, Uruguay, and New Zealand.

A small mixed fishery for Patagonian and Antarctic toothfish (Dissostichus Mawsoni) is conducted in the waters of the South Sandwich Islands. This fishery only takes place in line with scientific monitoring requirements to support the effective conservation and management of regional fish stocks. No fishing is permitted within 3 nautical miles of the South Sandwich Islands, or in depths shallower than 700m.

Mackerel icefish (Champsocephalus Gunnari) grow rapidly to a size of 55 cm on a diet that largely consists of krill. They form large aggregations in shelf waters all round South Georgia and Shag Rocks. A pelagic trawl fishery for mackerel icefish operates within South Georgia waters, mostly in the summer months. In 2010, the South Georgia mackerel icefish fishery was certified as sustainable by the MSC, and subsequently re-certified. The 2017 fisheries survey estimates the icefish biomass at South Georgia to be in the region of 90,000 tonnes. Annual catches are currently less than 1,000 tonnes.

Antarctic krill (Euphausia Superba) is a key species in the Southern Ocean ecosystem. It is estimated that there are 60 million tonnes of krill in the Southern Ocean. Krill are small (up to 60 mm long) shrimp like creatures that can be found in huge aggregations in Antarctic and South Georgia waters. Krill are important in the pelagic food-web of the Southern Ocean, linking primary production (plankton) to vertebrate predators (fish, seabirds and marine mammals).

South Georgia & the South Sandwich Islands is at the northern limit of the krill distribution. Krill at South Georgia & the South Sandwich Islands are not self-sustaining but dependent on the northerly movement of krill in the currents of the Southern Ocean from their spawning grounds under the ice in the Antarctic Peninsula and Weddell Sea. Krill reproduction is highly dependent on sea ice conditions and hence environmental factors.

CCAMLR currently restricts krill catches across the Southern Ocean to 620,000 tonnes – a little over 1% of the estimated total krill population. 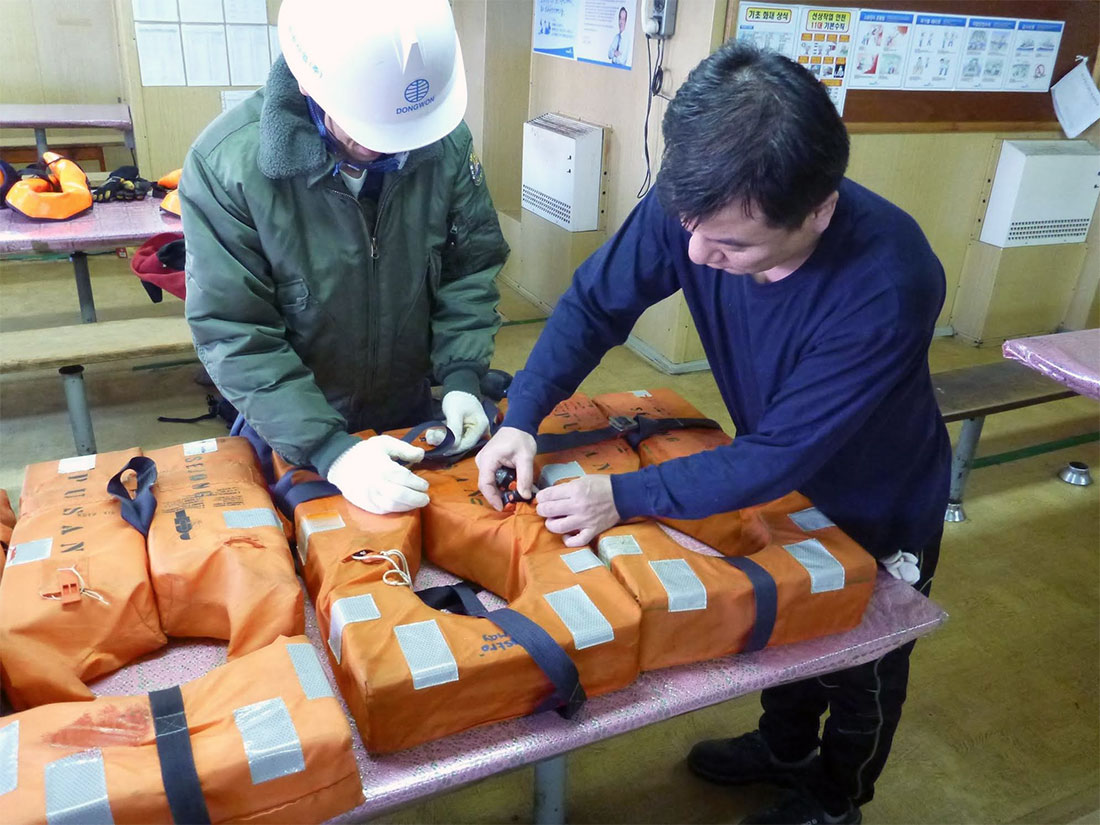 Checking lifejackets aboard a Krill Trawler. 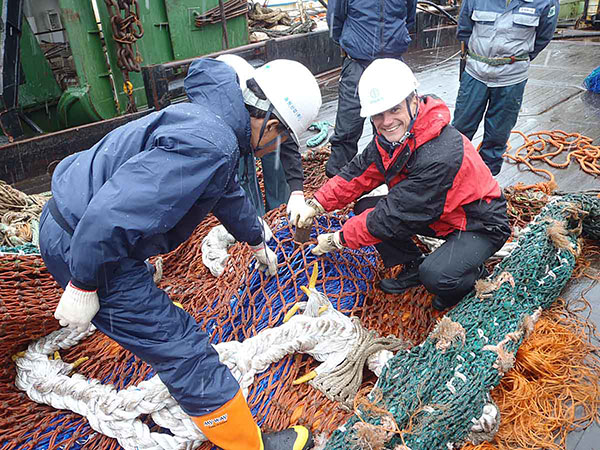 Government Officer inspects a fishing net prior to licensing a trawler.

FPV Pharos SG in Cumberland Bay with a tanker, a reefer and a trawler.