Heritage projects in South Georgia, whether they be relatively simple surveys, or more complex restoration projects are always logistically challenging, expensive and sometimes involve potentially hazardous work. The combination of these factors has limited the number of projects undertaken.

Nevertheless, GSGSSI has undertaken and provided logistical support to a range of different projects in recent years. The Territory has also benefited greatly from the 2011 UK and Norwegian Governments agreement to fund a series of projects in the Polar Regions (see UK and Norwegian Government Funding) and the continuing work of he South Georgia Heritage Trust, which continues to develop future project proposals. 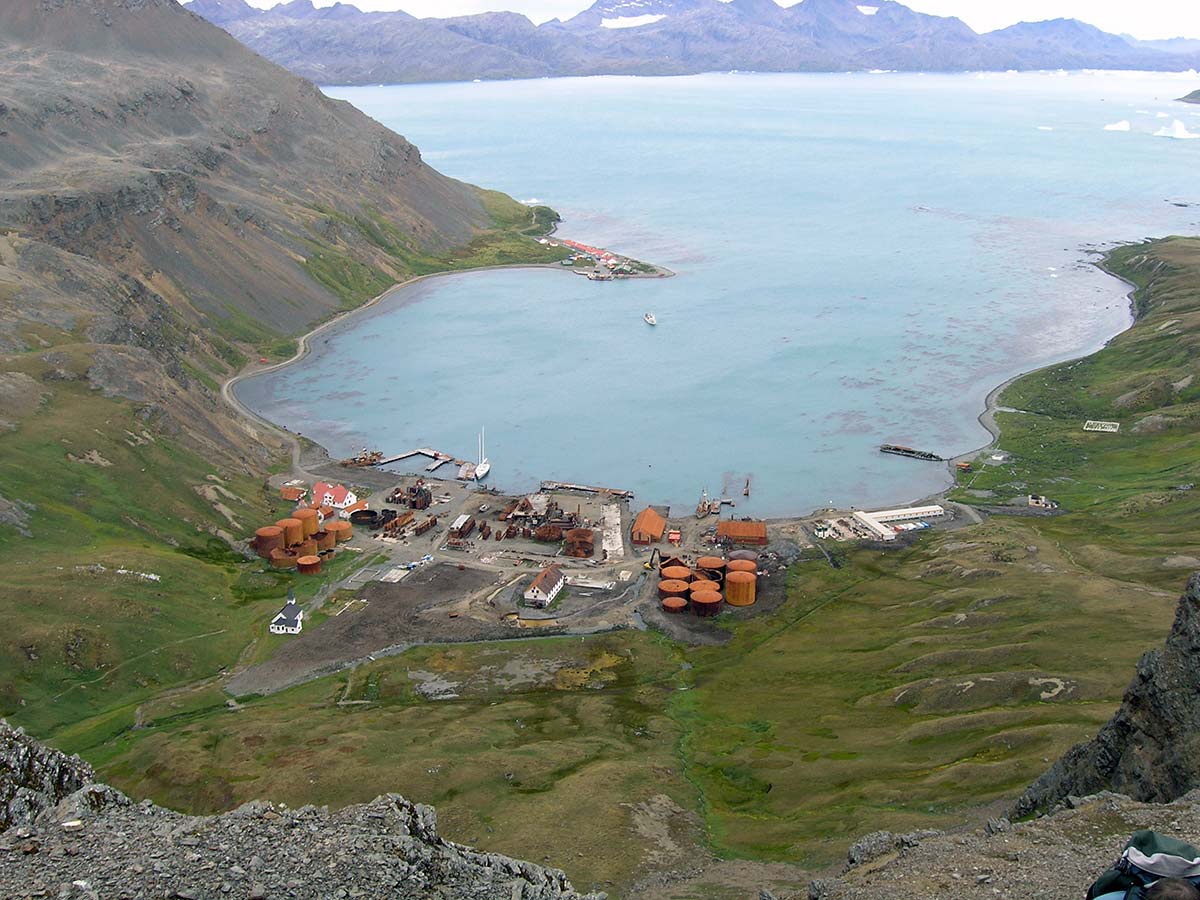 In 2003/4, following concerns about the possible exposure of staff and visitors to airborne asbestos and the hazardous nature of the structures, a major project was undertaken at Grytviken to remove the hazardous material and structures. This dramatically transformed the site, but it did facilitate future visitor access.

Today, GSGSSI is responsible for the implementation of the annual management plan for the Grytviken including the upkeep and maintenance of all the Museum buildings, the Church and the cemetery. This plan of works is reviewed annually by GSGSSI and specialist advice is sought as necessary. 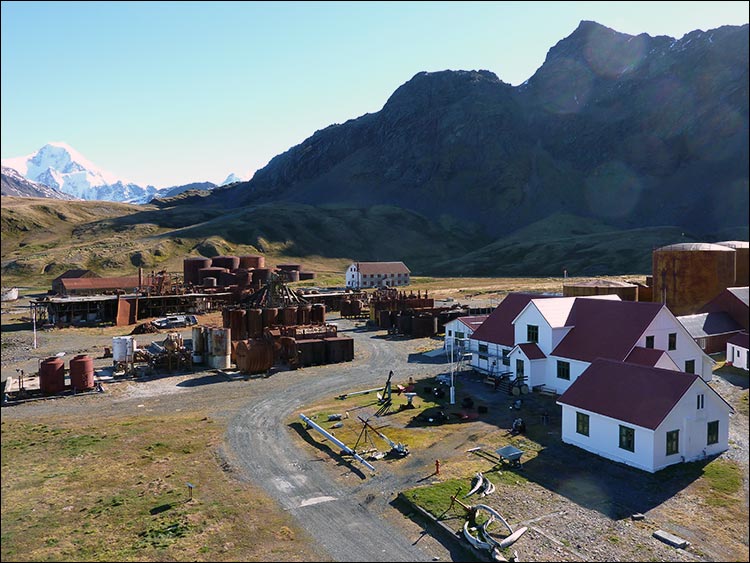 Over the course of the 2012-2014 summers the former Manager’s Villa in Stromness (where Shackleton, Worsley and Crean reached safety in 1916 following their traverse of the island) was surveyed and some basic maintenance undertaken to try and stem the rate at which this structure is deteriorating. The Norwegian Government funded this work (under the 2011 bilateral agreement with the UK, see UK & Norwegian Government Funding) with logistical support being provided by GSGSSI. Whilst the building is historically important, it is also of great significance from a Norwegian perspective due to its architecture, which features classical Norwegian building techniques and design from the period. 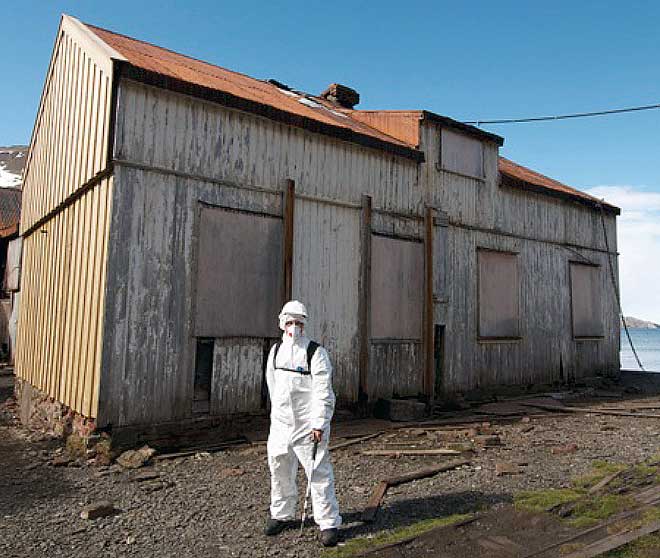 Preservation work at the former Manager’s Villa in Stromness.

In 2014, with funding assistance from the UK Government, GSGSSI restored and refurbished Discovery House at King Edward Point. The location of the Laboratory for the RRS Discovery expeditions, Discovery House has now returned to the function for which is was originally intended, to support visiting scientists.

Work on Nybrakke (New Barracks) at Grytviken has been funded, as part of the agreement between the UK and Norwegian governments to commemorate the centenary of Scott and Amunden’s journeys to the South Pole.

Initial work has repaired and restored the exterior of the building, replacing the roof and re-glazing the structure. The next stage of repairs will focus on the interior flooring, dealing with drainage issues and further internal works, with the intention of returning the building to functional state. 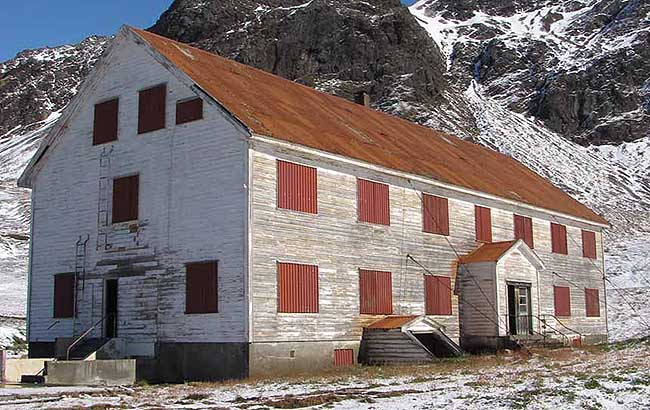 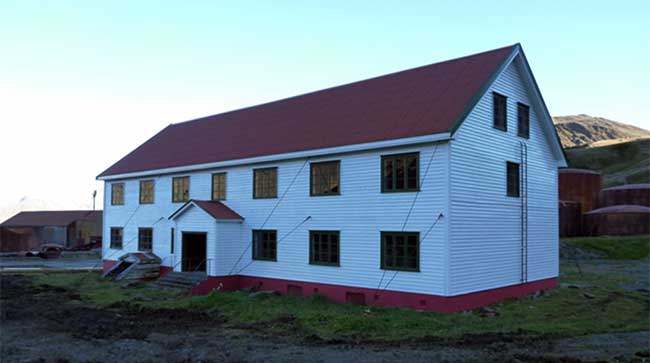 Over the course of the 2012-13 & 2013-14 austral summers, laser surveys of the former whaling stations were undertaken. Geometria, a New Zealand based heritage consultancy company undertook this work with laser equipment mapping both inside and outside buildings to make a 3d model and fly-through with millimetre accuracy. Conscious that the condition of the whaling stations continues to deteriorate, this work has provided a valuable archive record of the current condition of the whaling stations and an immensely useful management tool for any future projects.

The work was mainly funded by the Norwegian Government, as part of the agreement between the UK and Norwegian governments to commemorate the centenary of Scott and Amunden’s journeys to the South Pole. The project was overseen by GSGSSI and Purcell and GSGSSI also provided additional funding and logistic support for the project. 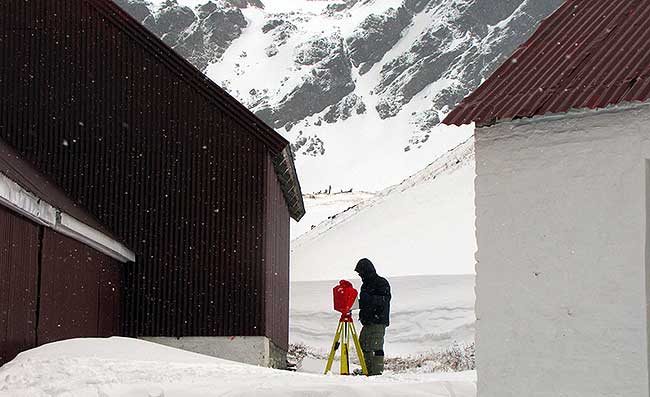 During the 2012-13 summer, funding from the UK Government (under the 2011 bilateral agreement with Norway, (see UK & Norwegian Government Funding) enabled the GSGSSI to engage specialist contractors to remove the remaining asbestos from the Husvik Manager’s Villa and immediate surrounding, thereby securing the long term future of the structure as a safe and accessible location for future use.

This work follows earlier external restoration work to the villa undertaken by the SGHT in 2006 by a team of skilled Norwegian craftsmen.

Husvik Villa: Before and after 2006 restoration.

The harsh environment and dangerous working conditions on the island meant that many men engaged in the sealing and whaling industries never returned home. There are cemeteries at all of the main whaling stations as well as number of isolated graves around the island’s coast.

Whenever it is safe and possible to do so, GSGSSI works closely with any visiting family or friends of the deceased to authorise and facilitate visits to the cemeteries.

GSGSSI annually maintains the Grytviken cemetery. It is now also becoming increasingly possible to also better maintain the cemeteries at the former whaling stations in Stromness Bay. These have deteriorated greatly in recent decades, despite the efforts of occasional dedicated volunteers over the years.

Over a number of years former Government Officer, Pat Lurcock, has developed a website to record information, where it exists, about the locations of individual graves. (http://www.wildisland.gs/cems/) 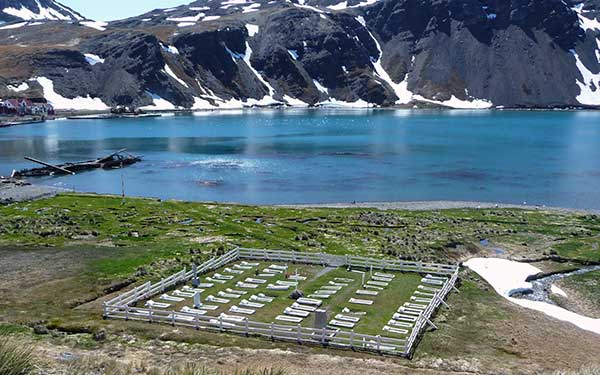