The final whaling operations ended in Leith in 1966, bringing to an end an extensive period of exploitation, following the establishment of first station by Carl Anton Larsen at Grytviken in 1904. During that period South Georgia was the principle location for all land-based whaling in the Southern Hemisphere. With the advent of pelagic whaling fleets in the late 1920s the reliance on shore based stations diminished. Simultaneously, whale stocks started to decline dramatically. This was also due in part to whales being taken outwith the jurisdiction of the whaling leases for South Georgia operations, issued by the Falkland Islands Government; an introduced stock management measure to try and protect whale populations from over-exploitation.

Today, with the exception of Grytviken, the principle stations are in an extremely hazardous state of disrepair and these are not safe to enter due to the advanced state of structural collapse and risk of exposure to airborne asbestos fibres. The scale of the problem is so immense that, following the Grytviken remediation project, is has only been within the financial means of Government to undertake surveys of the sites and prohibit public access (through the Prohibited Areas Legislation) in order to prevent accidental injury or risk of long-term illness. (see Prohibited Areas and Whaling Station Access).

In the coming years, further restoration projects are anticipated. Any project involving the former whaling stations will require significant funding, both in the short and long term. Careful consideration will be given to any proposal by both GSGSSI’s heritage panel and also the South Georgia Heritage Trust (SGHT).

Leith Harbour showing catchers laid up for winter and "Discovery 2" at jetty.

Carl Anton Larsen first identified Grytviken as an ideal location for a whaling station in 1902. Two years later he returned to establish the first station there.

Grytviken operated from 1904-65, initially by Larsen through the Compania Argentina de Pesca and then by Albion Star. Finally the Japanese company Gyogyo Kabushiki Ltd operated there on a sub-lease for the last 2 seasons. What is believed to be the largest blue whale ever recorded (33.8m) was landed at Grytviken during the early days of whaling operations.

During the intervening years the station gradually fell into disrepair. In 2001 concerns were raised about levels of airborne asbestos in the vicinity of the station and the hazardous state of some of the buildings in close proximity to the staff working in the Museum Staff and also at King Edward Point. A major Government project to remove all the hazardous material and structures deemed necessary and work commenced in 2003. This was a very major project, which was undertaken for GSGSSI by Morrison (Falklands) Ltd. This work dramatically and irreparably altered the character of the site, with the removal of many of the prominent structures. It did, however, prevent the complete closure of the station to all visitors. The work also exposed to public view much of the core machinery, and visitors are able to safely continue visiting Grytviken and the South Georgia museum, church and cemetery (where Sir Ernest Shackleton is buried).

GSGSSI now has in place a Conservation Management Plan for the whole Grytviken site, which it will continue to update and develop.

Grytviken is also of great historical significance as the last port of call for the ENDURANCE in 1914 and the burial site of Sir Ernest Shackleton, who died on board the QUEST in King Edward Cove on 5 January 1922.

Initially a floating factory site, the Husvik station was built in 1910 and operated by Tonsberg Hvalfangeri until the ownership transferred to Albion Star in 1960 after which the station closed.

A number of projects to renovate and restore the Manager’s Villa have been undertaken by GSGSSI and the SGHT (see projects). This has extended the life of this building and ensured that it will continue to fulfil a functional role for future projects. 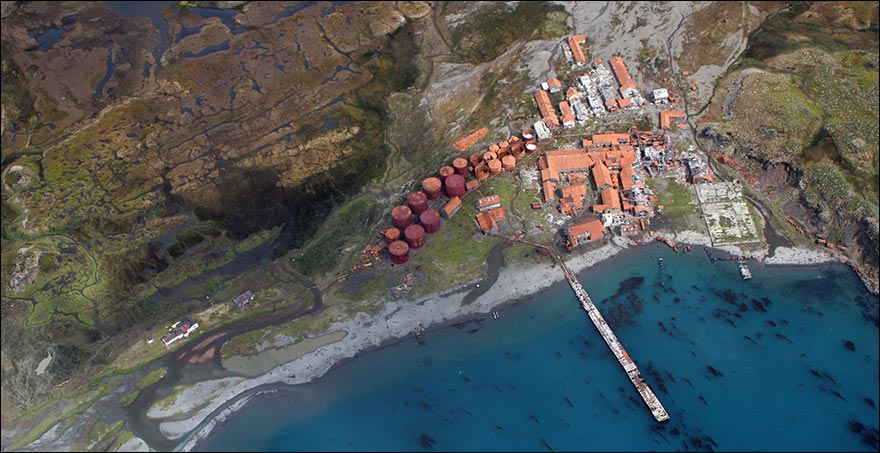 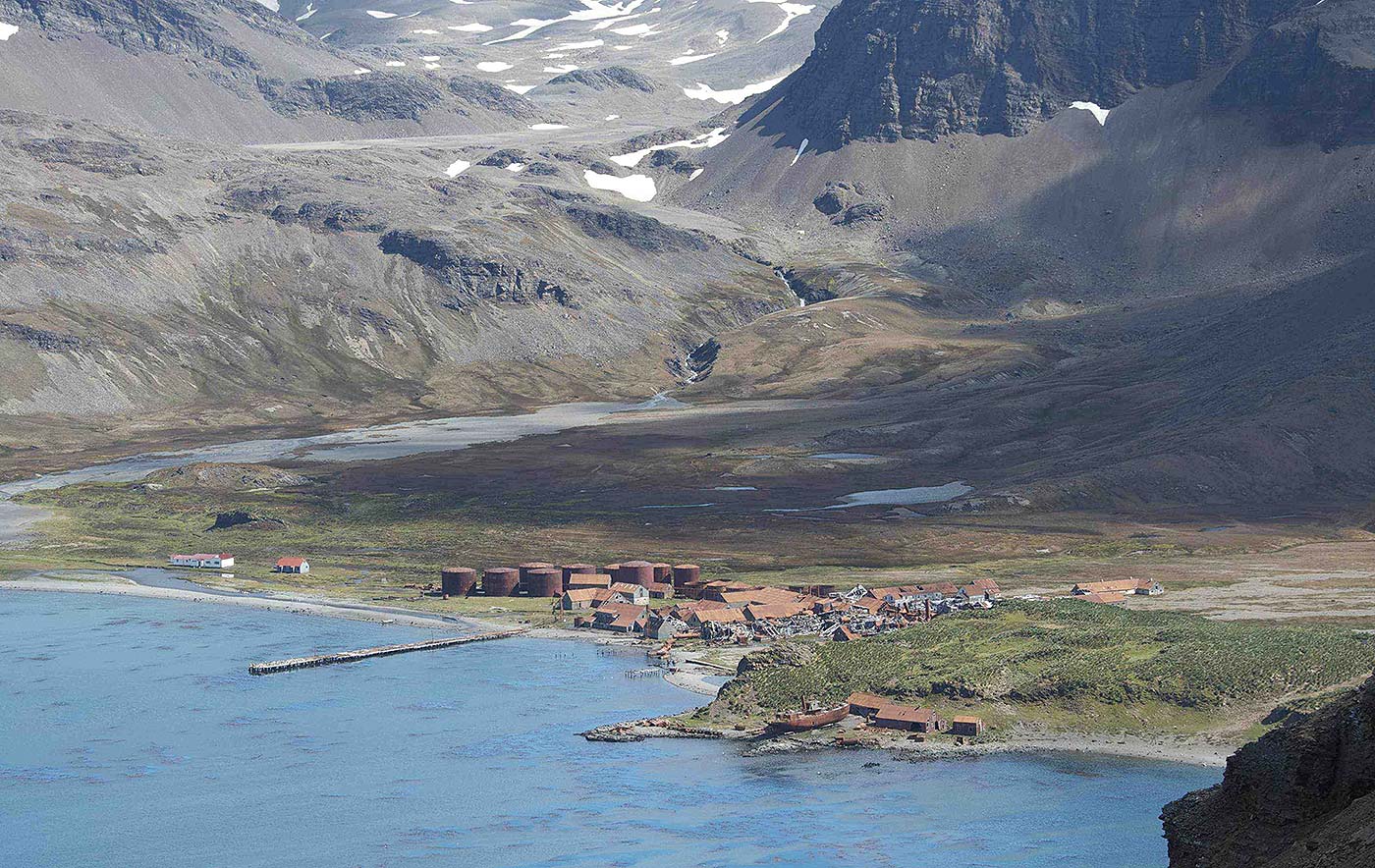 The shore station was built in 1912 to augment the floating factory facilities, which were established 5 years earlier in 1907. Sandefjord Whaling Co, the Southern Whaling and Sealing Company and the Vestfold Whaling Company operated the station until 1931, when it was converted for use as a major ship repair yard, operated by the South Georgia Company of Leith. 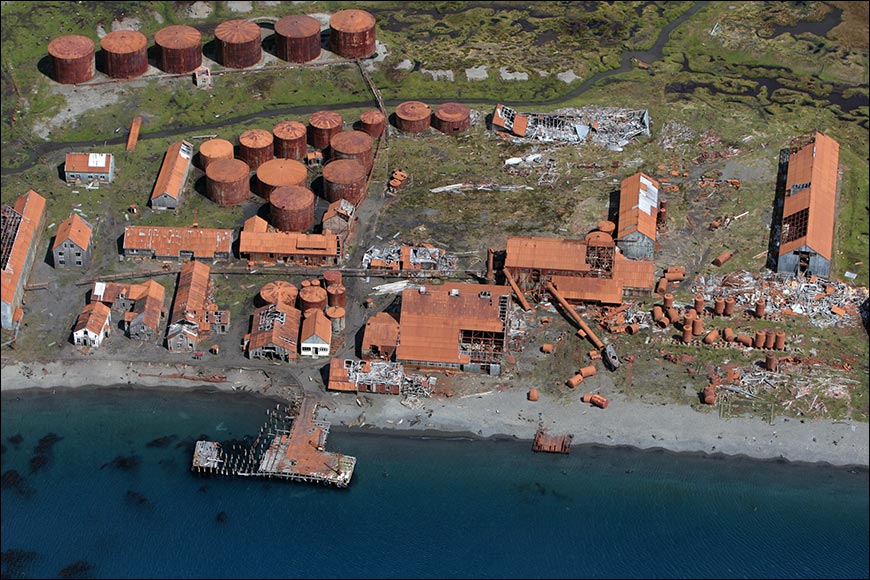 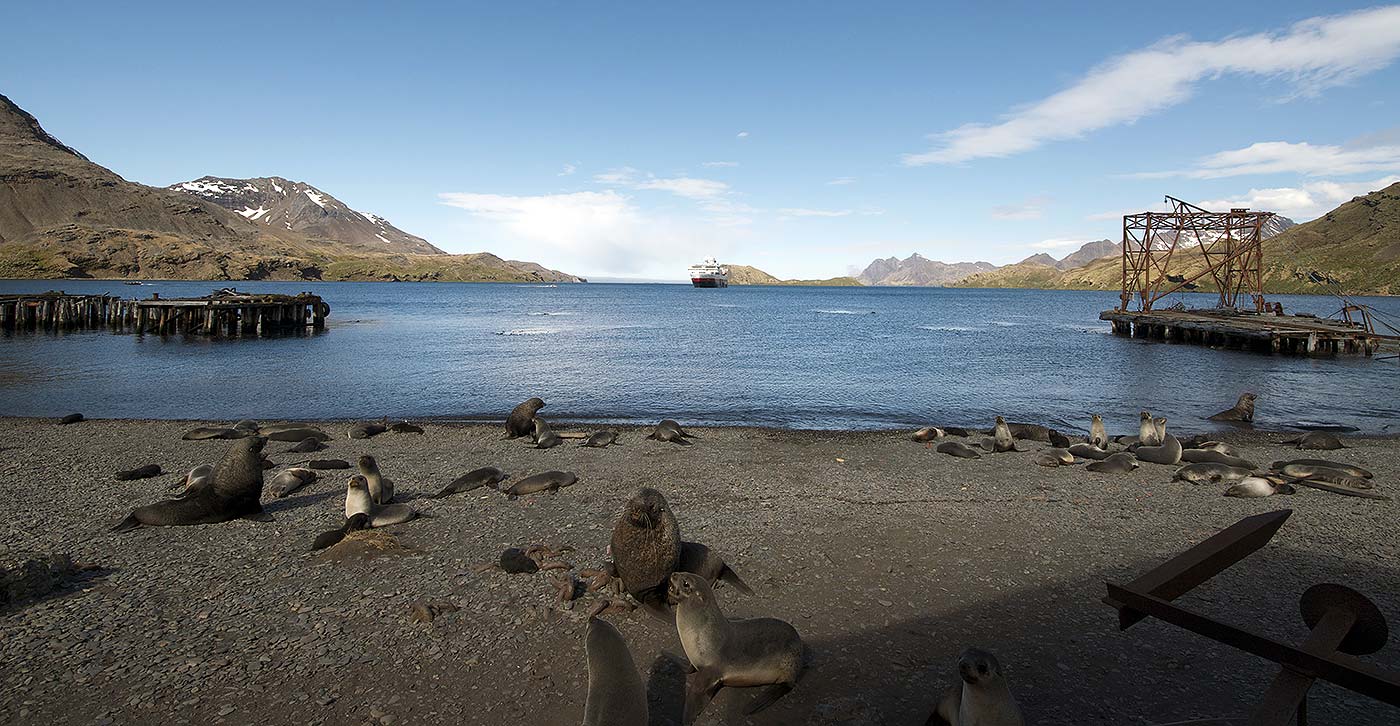 The largest of the whaling stations, the Christian Salvesen Group of Edinburgh owned Leith from 1909-1966. During the last 3 seasons it was also sub-leased to the Japanese company Nippon Suisan Ltd. In 1911 the original site of the whaling station had to be vacated following a series of landslides, the area becoming known as Jericho. 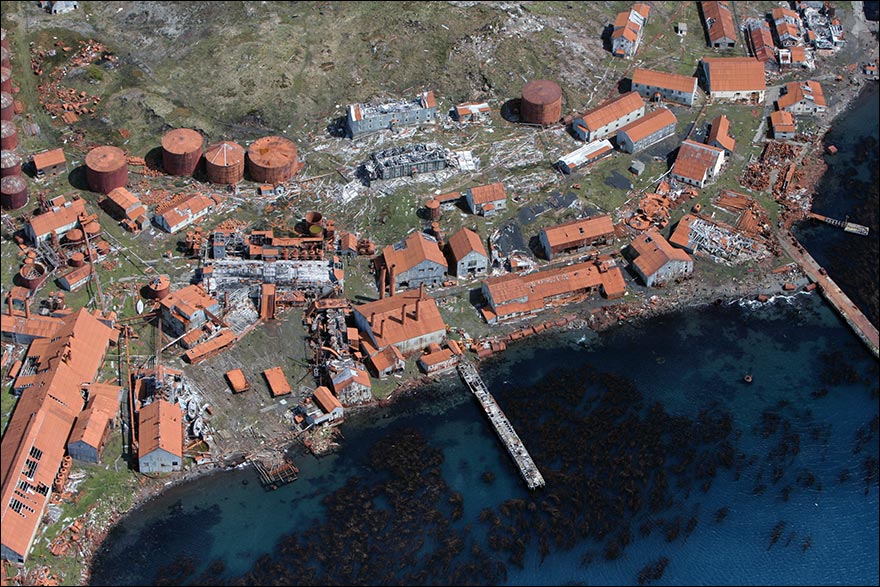 Prince Olav was the last of the main whaling stations to commence operations and the first to be closed, operating for only 20 years from 1912-1932.

Initially the operation at Prince Olav Harbour was also a floating factory operation, before the main station was constructed 4 years after operations commenced. The South Georgia Company eventually purchased the station from the Southern Whaling and Sealing Company and moved some of the infrastructure to Leith. 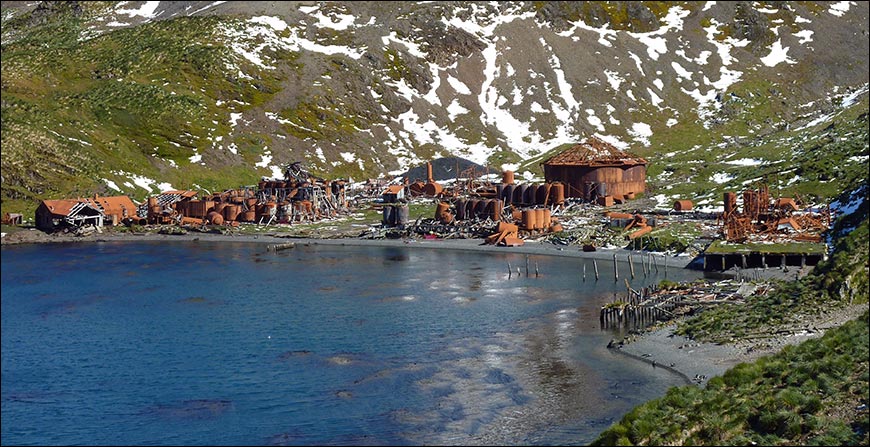 The Ocean Whaling Company operated the shore station in Ocean Harbour from 1909-20 when it came under the operation of the Sandefjord whaling Company and most of the infrastructure was transferred to Stromness, where former Ocean Harbour structures can still be identified. The site is also the location of the oldest known grave on South Georgia, that of the sealer Frank Cabrial who died in 1820. 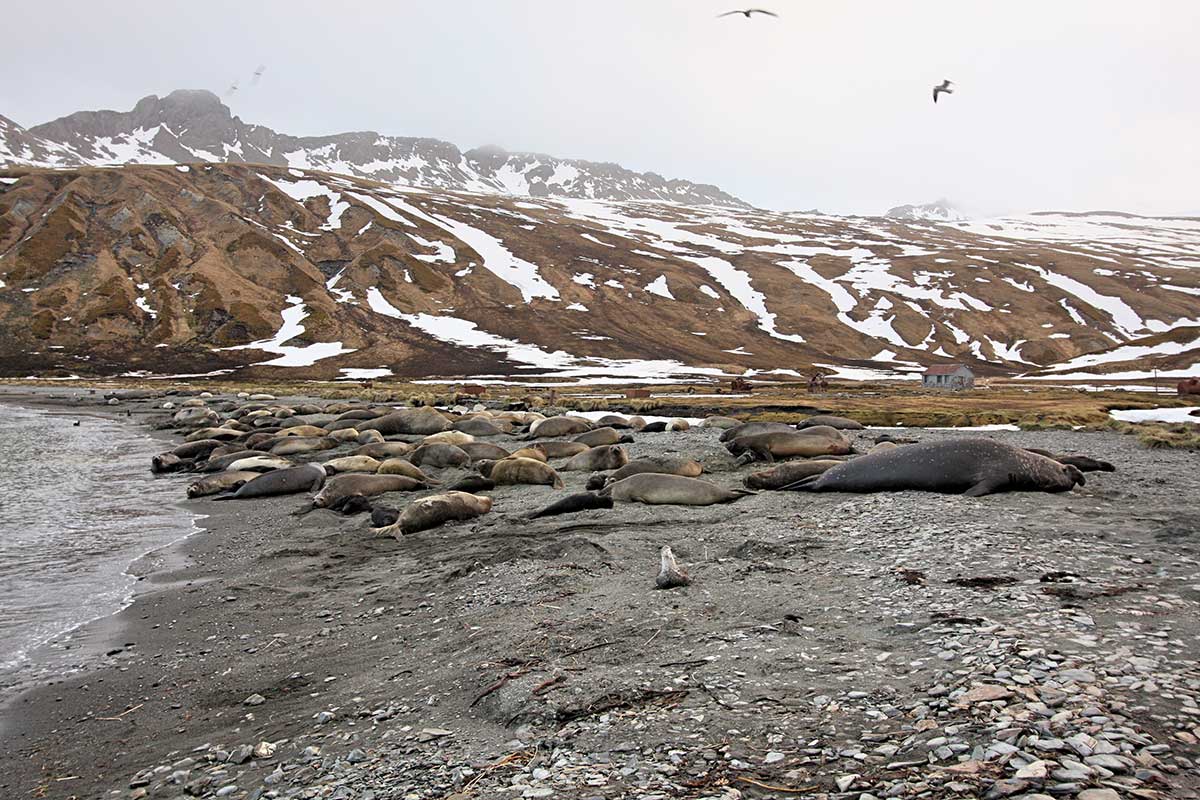 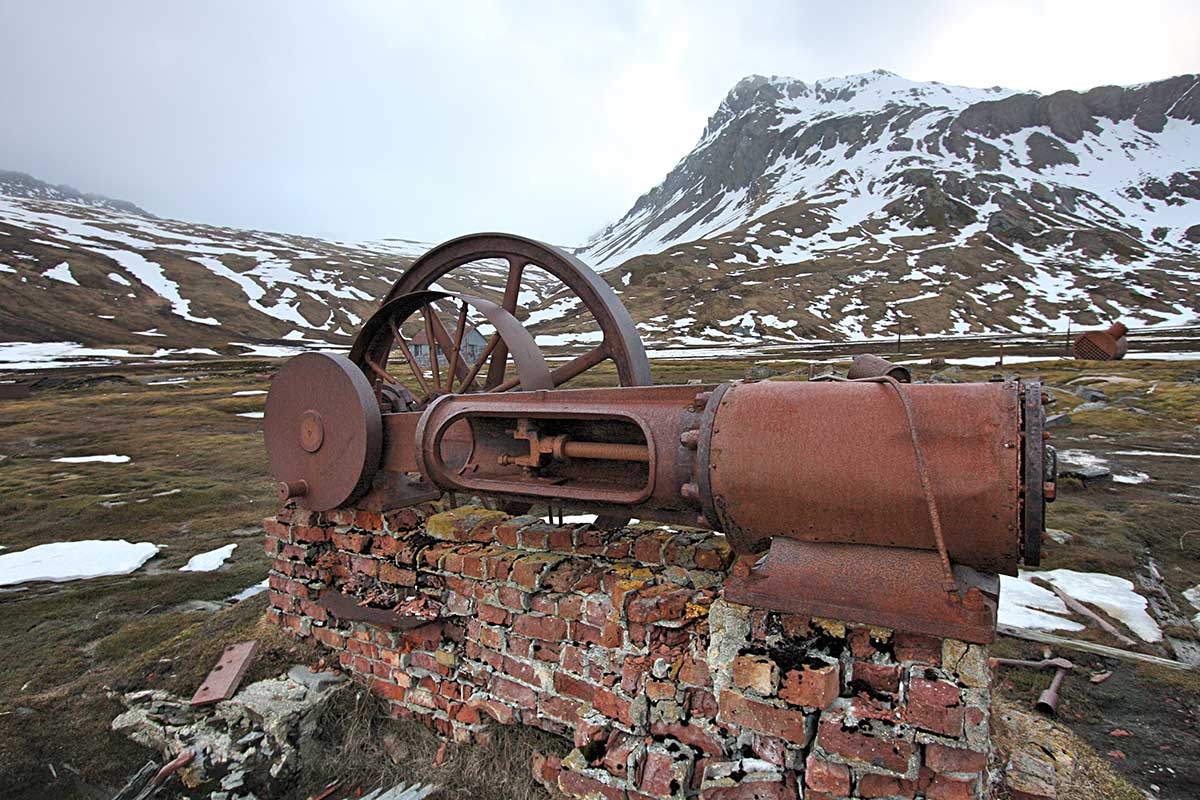 Godthul operated between 1908 – 29. The shore infrastructure was very basic with the station supporting factory ships. Cruise ship passengers now regularly visit the site of the station, which is safe for landings. 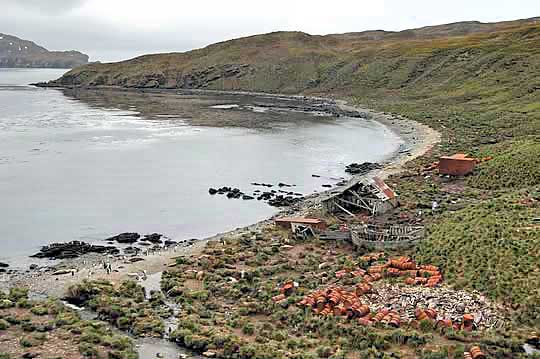