The Government of South Georgia & the South Sandwich Islands is made up of a small band of passionate people from all over the world, all of whom are dedicated to the environmental recovery and resilience of this remote UK Overseas Territory.

Laura began her overseas career as cabin crew for an international airline in 2001, and then worked across the public, private and charitable sectors around the world prior to joining GSGSSI in 2021. She is accountable to His Majesty’s Commissioner for the effective management, good governance and operation of this UK Overseas Territory.

Laura has overall responsibility for people and finance, and an annual operational budget of c.£8m. to deliver our strategic ambition: “Environmental recovery and resilience through world-leading evidence-based sustainable management”.

Laura lives in the Falkland Islands with her husband and 3 children. When not at work, you can usually find her sat at a sewing machine producing clothing for herself and her family. 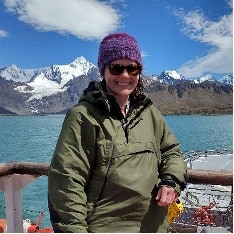 Steve joined GSGSSI from the Falkland Island Government, where he was involved in setting up the Falkland Islands Maritime Authority, including establishing accident investigation procedures and aligning processes with key stakeholders in local government, industry and international partners.

Previously, he spent six years as a commercial yachting captain, sailing many thousands of ocean miles across the Mediterranean and Atlantic. When not undertaking deliveries, he assisted students building sea miles for their conversions and volunteered with the not-for-profit “Sailability”.
Prior to his maritime career, Steve worked in government enforcement roles with the military and the police, specialising in analysis, counter terrorism, and close protection. He qualified as a Senior Investigating Officer and spent 8 years as a Police Dog Commander.

Steve’s passions include a passion for all things art, photography and literature. He enjoys hill walking and makes a poor attempt at trail running. A very keen sailor and retired sky diver, Steve is a fan of the outdoors (and also coffee). 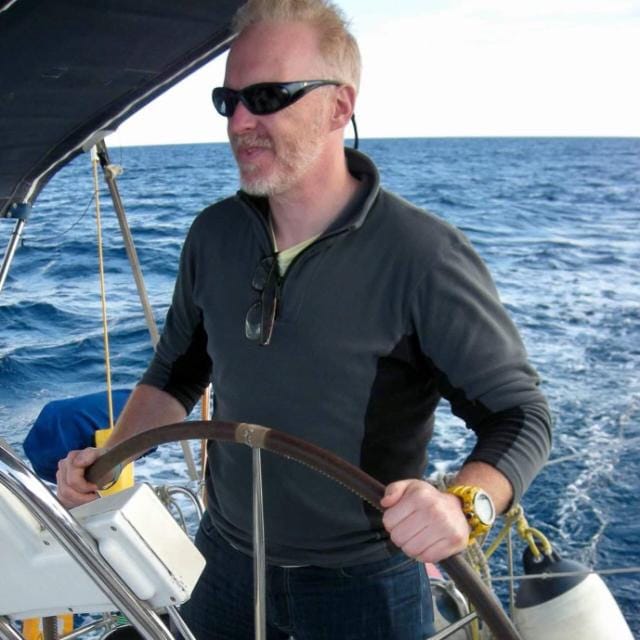 With degrees in Marine Biology and Ecosystem-based Management, Vicki has had a varied career in fisheries management and marine conservation in the UK prior to moving to the South Atlantic.

In 2016 she joined the British Antarctic Survey as Fisheries Biologist at King Edward Point research station and fell in love with this unique and harshly beautiful island. Vicki spent most of the next 5 years at South Georgia, including as Station Leader at the small and remote Bird Island.

In 2021, she joined GSGSSI as a Government Officer at King Edward Point, overseeing Government operations in both winter and summer seasons, before being appointed as the Operations Manager in 2022.

Born and raised in Northern Ontario (Canada), Allison has always loved the outdoors. Her career has taken her around the world as a tour guide, managing programming for non-profits in South and Central America and, most recently, overseeing logistics and sustainability for a Polar Expedition operator.

Allison is an avid outdoorswoman who gets outside whenever she can to camp, hike or canoe. If she’s not adventuring outside or travelling, you’ll probably find her cross-stitching. 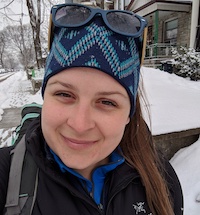 Jo joined the Government in February 2022 as the Business Support Officer having previously worked in administration in the third sector and private sector in Scotland and Australia.

She is also the first point of contact for customers and stakeholders.

Jo is enjoying being back in the Southern Hemisphere after a number of years in Scotland and is looking forward to exploring as much of the Falkland Islands and South Georgia as possible. As an artist and crafter in her spare time, Jo is excited by the inspiration she finds in these incredible islands. 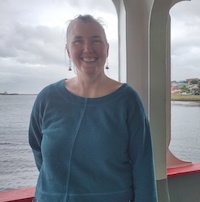 Mark joined GSGSSI in July 2018 on secondment from the British Antarctic Survey (BAS) where he has worked on South Georgia marine and fisheries science projects since 2000.

Mark holds a PhD in marine fisheries ecology and has extensive fisheries research experience. He has been the lead scientist on nine research surveys of fish resources at South Georgia.

Mark has represented the UK as part of the UK Delegation to CCAMLR and has chaired many international conservation and fisheries treaty meetings.

Mark divides his time between Cambridgeshire and Stanley and loves rugby, cycling, walking Keats the dog and playing guitar badly. 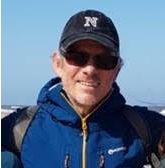 John joined the Government in March 2021 on secondment from the Department of Environment Food and Rural Affairs in the UK. Whilst with DEFRA he was responsible for the environmental aspects of negotiations for the new UN Treaty for Areas Beyond National Jurisdiction, environmental regulations for Deep Sea Mining and the marine targets for the Post 2020 Global Biodiversity Framework. He was vice-chair of the OSPAR Commission for the protection of the Northeast Atlantic, having previously been chair of the Biodiversity Committee.

John has previously worked on reforming fisheries management in MPAs, Parliamentary legislation and de-regulation, non-native species and Government statistics. His first “real” job was as a supermarket manager, a very long time ago.

Sue first visited South Georgia in 2009 as a fisheries ecologist with the British Antarctic Survey at King Edward Point, and she remained with BAS for the next 8 years including overwintering at King Edward Point and  spending considerable time on commercial fishing vessels as a scientific observer and conducting research surveys. She joined GSGSSI in 2017.

Sue is responsible for the day-to-day operation of South Georgia’s fisheries and Marine Protected Area, working with the Director of Fisheries and Environment to manage the fisheries sustainably and to the highest international standards in compliance with the Commission for the Conservation of Antarctic Marine Living Resources (CCAMLR).

Jen joined the Government in 2012 as the Environment Officer.

Jen has been involved in a huge range of projects about or actually on South Georgia including non-native species management, wildlife surveys and policy development. Jen was instrumental to the success of the reindeer eradication programme and supporting the subsequent rodent eradication.

In her current as Environment Manager, Jen has responsibility for:

Jen is now mainly based in the UK where she enjoys all things outdoors. She travels south as often as she can.

All the Government Officers have similar responsibilities and they include:

Educated as a marine biologist with special interest in marine ecosystem conservation, Nestor has enjoyed a varied work and life experience gained in different parts of the world.

Nestor joined GSGSSI in April 2022 from the Falkland Islands Department of Fisheries. He has always been genuinely attracted to remote locations, where human influences are humbled by thriving ecosystems and majestic landscapes of outstanding natural beauty.

Nestor joins the team with strong moral, environmental and ethical motivations. The opportunity to actively engage in the preservation of this unique environment is not only a privilege but a huge responsibility he is very conscious of.

David graduated with a Master’s degree from the University of Cambridge’s Scott Polar Research Institute in 2013. He first experienced the Polar Regions as a student at the University Centre in Svalbard in 2010.

He returned to both Polar Regions to work in numerous roles, first as a Field Assistant for scientists across the Svalbard archipelago, then as a crew member aboard a scientific research vessel in West Greenland, and thereafter as a member of expedition teams aboard ships. This led to numerous tours to South Georgia and a deep familiarity with the visitor sites, which left a strong desire to spend more time on this magnificent island. Most recently he spent time during the COVID-19 pandemic as a radio operator for HM Coastguard in (North) Shetland.

David has a keen interest in polar history, and is trained in glaciology and glacial marine geomorphology. When not kayaking the waters off his home on (North) Shetland he can be found aboard vessels within both the Arctic and Antarctic, endeavouring to deliver a comprehensive understanding of these regions and their future challenges to guests. He is now excited to be safeguarding South Georgia in a more direct manner whilst representing GSGSSI. 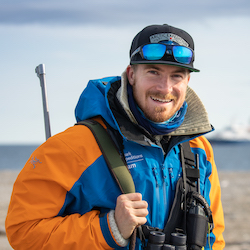 James graduated with degrees in archaeology and heritage from Exeter University and the University of Cambridge before volunteering overseas in Nepal with VSO. During his studies he worked on excavations in Romania and Scotland before pursuing a career in commercial archaeology running excavations throughout the UK. Most of his free time is spent wild camping and mountaineering across Scotland or covered in mud in an excavation somewhere. James has a fascination for the heritage and history of Antarctic exploration as well as the vibrant wildlife and wilderness found there. He’s looking forward to turning the skills he’s acquired in his various roles towards the preservation and protection of the beautiful environment and heritage of South Georgia and the integral work of the Government in the territory.

A passion for post is an understatement when it comes to Matthew. Nothing gets his heart racing quite like a mint collection of stamps.

It all started at birth, when unable to reach the hospital in time, Matthew was delivered by a passing postman. You may think it destiny that he would end up in the Postal Service. Born and raised in the North West of England, his favourite childhood activities were football, chess, and licking stamps.

He put his philatelic pursuits to one side in his early twenties, choosing instead to earn a degree in Criminology and travel the world. After a spell as an English teacher in Vietnam was cut short by covid, Matthew could resist his postal calling no longer. With a love for the outdoors, and a strange admiration for penguins, only one place would do.

Honoured to take up the position of Deputy Postmaster of South Georgia, Matthew takes great satisfaction from running the world’s most charming post office.