Her Majesty the Queen – 90th Birthday

On April 21st, the Government of South Georgia & the South Sandwich Islands joined the United Kingdom, Commonwealth countries and UK overseas territories in celebrating the 90th birthday of Her Majesty Queen Elizabeth II by lighting a Beacon on South Georgia.

“This is will be one of the most remote beacons lit and a fantastic way to celebrate The Queens 90th Birthday, bringing all the people on station together and thinking about our friends and family attending similar events thousands of miles away at home”.

To commemorate this event GSGSSI also released a set of four stamps and souvenir sheet which showcase “90 Years of Style”, depicting Her Majesty’s impeccable style across the years.

On the 90 pence stamp The Queen wears a slim-fitting white lace dress to a garden party in Sydney, Australia, before leaving for Tasmania on the liner ‘SS Gothic’, February 1954. The £1.25 stamp features The Queen leaving the Christmas Day Service at Sandringham Church in 2014.

The two images on the Souvenir Sheet depict The Queen at Ascot Racecourse in 2014 and The Queen during the Badminton Horse Trials in Gloucestershire in 1968. 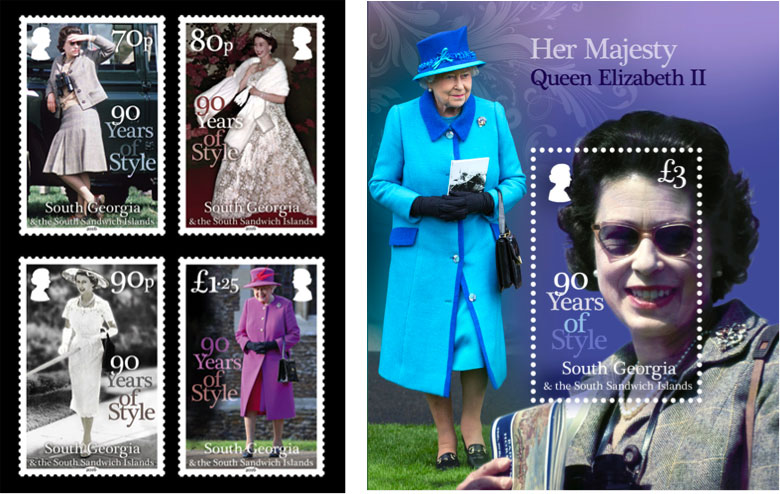 A Centenary Service of thanksgiving for the courage and endurance of Sir Ernest Shackleton CVO and his men was held on Friday 20th May in Westminster Abbey to mark the anniversary of the Imperial Trans-Antarctic Expedition (1914-1917). It was an occasion which the Government of South Georgia & the South Sandwich Islands was pleased to support.

A Commemorative Booklet was produced for the occasion. A copy can be downloaded here.

GSGSSI also released a special stamp issue to mark the centenary. This date was chosen to coincide with the arrival of Ernest Shackleton, Tom Crean and Frank Worsley at Stromness whaling station on South Georgia.

The Imperial Trans-Antarctic Expedition, also known as the Endurance Expedition after the expedition ship, is considered by some to be the last major expedition of the Heroic Age of Antarctic Exploration. By 1914 both Poles had been reached so Shackleton set his sights on being the first to traverse Antarctica. Shackleton arrived at South Georgia on 5 November 1914. After a month-long stop at Grytviken whaling station the expedition sailed into the Weddell Sea with the aim of crossing the Antarctic continent to the Ross Sea where they would be met by the Ross Sea party aboard the Aurora. Eighteen months later Shackleton returned to South Georgia, albeit in very different circumstances. The Endurance had been lost in the ice and her 28-man complement had spent months in makeshift camps before they took to the lifeboats to reach Elephant Island. It was from here that Shackleton and five companions made their 1,300 km boat journey aboard the James Caird to King Haakon Bay, South Georgia. After a short period of recuperation Shackleton, Tom Crean and Frank Worsley crossed South Georgia on foot to Stromness whaling station where they arrived on 20th May. Shackleton then began his – ultimately successful – efforts to rescue his men on Elephant Island.

GSGSSI has launched its consultation on two more proposals as part of its review of legislation.

Modernising GSGSSI’s legislation is a key part of its strategy and over the coming months consultation papers will continue to be launched on the website about subjects including application of English Law, and crime. All our stakeholders are encouraged to participate and provide comments.

This second round of consultation is about Immigration and Customs and is open until the 1st July 2016. The proposals can be downloaded here.

The Government of South Georgia & the South Sandwich Islands received information that linked the Captain of one of the vessels licensed to fish in its maritime zone to previous Illegal, Unregulated and Unreported (IUU) fishing activity.

Upon learning of this information the operator of the fishing vessel voluntarily instructed the vessel to return to Stanley and secured a replacement Captain. GSGSSI reviewed the operator’s recruitment processes and has been informed by the operator that changes to these processes, to improve and strengthen them, have now been put in place.

Having taking into consideration all relevant information, including the action taken by the operator, GSGSSI has issued the operator with a written warning in respect of the adequacy of their recruitment processes.

GSGSSI aims to manage its fisheries to the highest international standards of safety and sustainability. It is committed to taking robust action in response to any links to IUU fishing identified with any vessel licensed to fish in its waters.

IAATO is a non-profit industry association and its founding principles and mission are to advocate and promote the practice of safe and environmentally responsible private sector travel to the Antarctic.

During the 2015/16 season over 8,000 visitors travelled to South Georgia & the South Sandwich Islands on IAATO cruise vessels and yachts. IAATO’s high standards and self-regulatory approach mean that IAATO vessels visiting South Georgia & the South Sandwich Islands have access to a wide range of approved landing sites. GSGSSI has a long association with IAATO andI is currently working with the organisation to better understand the tourism challenges of the future, including the importance of facilitating visitor access whilst protecting this UK Overseas Territory’s unique environment. 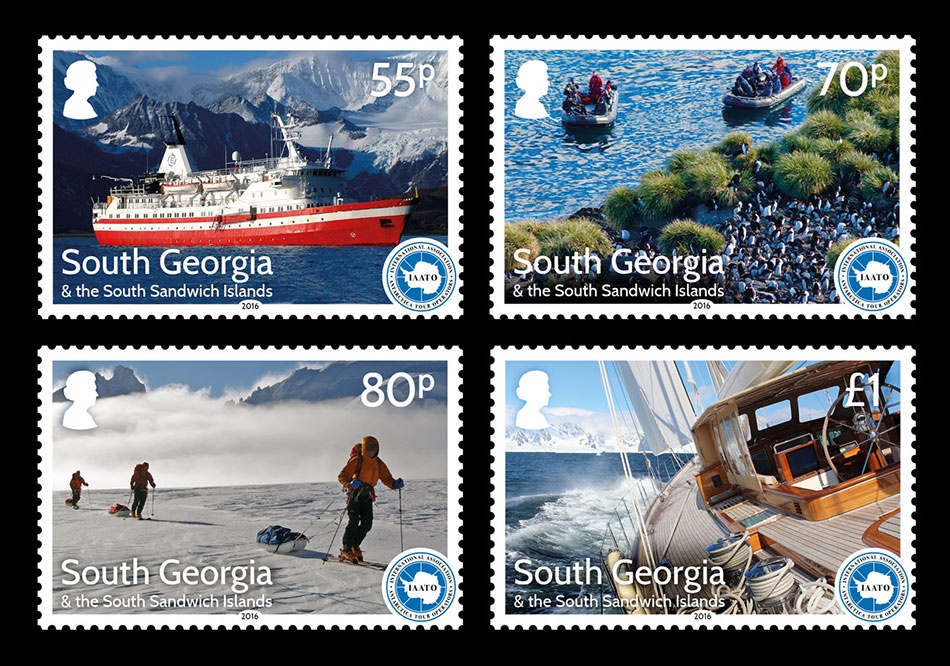 GSGSSI were represented at the annual IAATO Meeting in Newport, Rhode Island. The meeting provided an opportunity to engage directly with IAATO members to review the 15/16 tourist season and brief them on plans for the year ahead. Among the issues discussed were administrative and environmental protection updates, a review of incidents and exercises, and an update on the heritage works programmes for the coming season.

GSGSSI also hosted a special half-day workshop with IAATO members to review visitor activity on South Georgia as part of a project aimed at improving site management and the integration of visitor sites into the future system of Terrestrial Protected Areas. The workshop proved a valuable and collaborative step forward in the development of an evidence-based plan for visitor monitoring.

The full briefing document can be downloaded here. 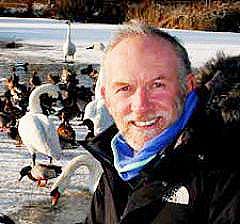 Dundee University Professor Tony Martin, project director at the South Georgia Heritage Trust, has been named Conservationist of the Year by the Zoological Society of London.

Professor Martin spearheaded the “Team Rat” project on South Georgia to eradicate the island’s rats for the first time in 200 years to enable the native seabirds to flourish and save some rare species, including the South Georgia pipit, from extinction.

Monitoring work to date indicates that the first phase of baiting was successful, and a large survey at the end of 2017 will assess whether the areas baited during the second and third phases were similarly effective in removing every single rodent.

Professor Martin said he was “immensely proud” to be named Conservationist of the Year. He added: “It was a privilege to lead such a remarkable team of people, ‘Team Rat’ as we became known, on this breath-taking sub-Antarctic island.”

Professor Martin’s book on the project, Reclaiming South Georgia, was recently reviewed on the Agreement on the Conservation of Albatrosses and Petrels website.

Shackleton – The Voyage of the James Caird. A Graphic Account 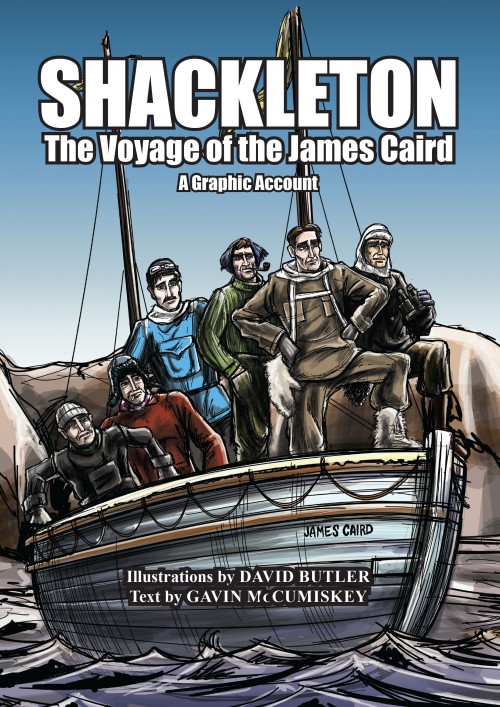 A graphic novel ‘Shackleton – The Voyage of the James Caird‘ has been published.

When the mighty Endurance becomes trapped in the Weddell Sea, Ernest Shackleton’s dream to cross the Antarctic becomes a fight to save the twenty-seven souls that set sail with him. With five others, he takes to the sea in the lifeboat, James Caird, and sets a course for South Georgia, 800 miles away across treacherous waters. This graphic depiction brings to life the ceaseless struggle against the harshest environment on Earth, and culminates in the most dramatic real-life open-boat journey in the history of mankind.

It is the first illustrated retelling of the greatest feat of leadership and survival ever recorded.

Illustrator David Butler put together a video about creating the cover of his book.

South Georgia – Wildlife and Heritage: A mini-documentary made from the footage not used in the Britain’s Treasure Islands documentary series on BBC Four – now available on YouTube.

Dundee professor recognised for offering chance of life to millions of seabirds on island sanctuary:

On This Day: 1916, Shackleton arrives on South Georgia:

1916: The Greatest Boat Journey Ever Made:

The Wind that Shook South Georgia – An Irishman’s Diary about the 1916 Rising and the Voyage of the ‘James Caird’:

Polar opposite: The Irishman who spent 18 months living in Antarctica: