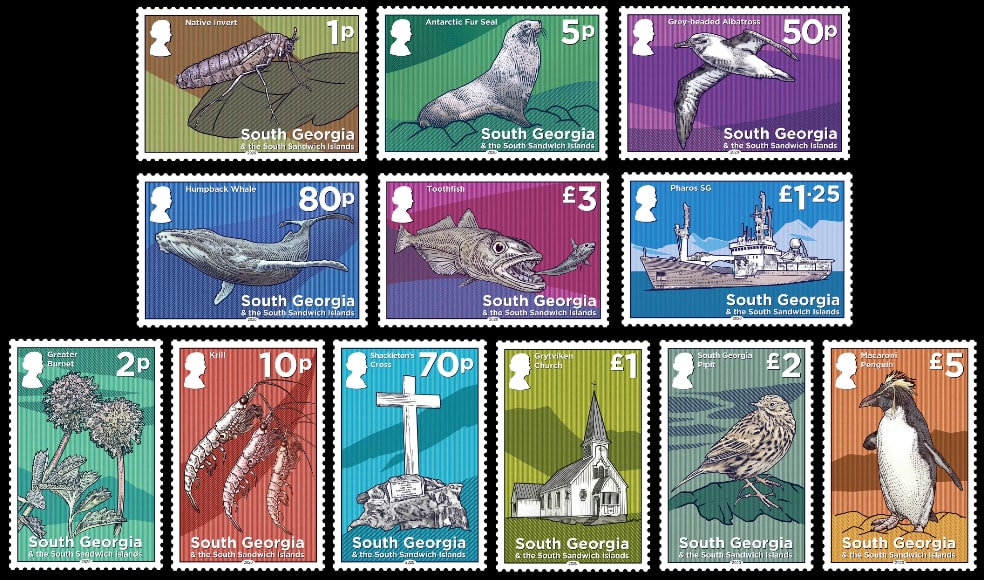 15/10/20: Today the Government of South Georgia & the South Sandwich Islands is delighted to release its latest set of definitive stamps.

South Georgia & the South Sandwich Islands (SGSSI) are set against a backdrop of constant change. Until Captain Cook landed on the island in 1775 and claimed it for King George III, South Georgia was untouched by man. The first sealing expeditions came just a few years later and human driven change began apace. Sealers decimated fur and elephant seal populations and inadvertently introduced rodents which predated native birds and changed the islands immeasurably. Shortly after the sealers left because their industry was no longer viable, a new wave of change came with the whaling industry. As demand for whale oil grew, large processing facilities and shipyards were built on shore and a host of harmful materials and non-native plant species were introduced to the environment. Abandoned in the 1960’s, these facilities leave a valuable historic record and a host of environmental challenges in their wake. The oceans around South Georgia were once again exploited beyond their sustainable limit from over fishing in the 1990’s. However, today nature takes the driving seat and SGSSI is a global rarity – an ecosystem in recovery.

More recently, the changes to SGSSI have mostly been in favour of the environment. Since becoming a Territory in its own right in 1985, the Government of South Georgia & the South Sandwich Islands (GSGSSI) has put the environment at the heart of its policies.

Each of the stamps in the new definitive represents an iconic image for SGSSI and has a story of restoration and hope:

1p – Native Invert: Native invertebrates, and the habitats they live in, now have the highest level of protection under our Wildlife and Protected Areas legislation.

2p – Greater Burnet: Once heavily grazed by reindeer which were introduced by Norwegian whalers and outcompeted by non-native plants, burnet is now thriving due to eradication projects to remove the species which harmed it.

5p – Antarctic Fur Seal: Protected by national and international legislation, fur seals are now abundant on South Georgia’s beaches. Higher predators such as fur seals are used as a barometer for change, and so the thriving seal populations we see today are a good indicator of a balanced marine ecosystem.

10p – Krill: The base of the Antarctic food chain, within the SGSSI Marine Protected Area special measures, such as no take zones and seasonal closures, are in place to maintain its abundance so wildlife can feed on krill whenever they need to; a critical time being when they are feeding their young.

50p – Grey-headed Albatross: Thousands of these birds were once killed by the fishing industry but new by-catch mitigation measures pioneered in SGSSI means birds are no longer caught in our waters. GSGSSI supports a range of initiatives to better understand global foraging patterns of albatross and in partnership with ACAP, are working to protect them beyond our borders.

70p – Shackleton’s Cross: Perhaps the world’s most famous explorer, the cross at Hope Point was erected by his men shortly after he died. It was fully renovated in 2018/19 austral summer including the secret compartment; will you find it when you visit?

80p – Humpback Whale: Although populations were significantly depleted by the whaling industry, gatherings of dozens of humpback whales feeding on krill swarms are now a common sight in the northern bays of South Georgia.

£1 – Grytviken Church: Built by Norwegian whalers, the church has been renovated using traditional techniques through a joint initiative between GSGSSI and Norwegian Directorate for Cultural Heritage.

£1.25 – Pharos SG: A vital tool in protecting the SGSSI Marine Protected Area against illegal, unregulated and unlicensed fishing. Pharos SG also provides vital logistical support to Government, science & monitoring projects and building teams all of which are vital for the sustainable management of the Territory.

£2 – South Georgia Pipit: Endemic to South Georgia these small song bird songs were taken to the brink of extinction by the invasive rodents, but following the rat eradication project, the air is filled with their song once again.

£3 – Toothfish: Certified by the Marine Stewardship Council as one of the world’s most sustainable fisheries, the SGSSI toothfish fishery is a model of how to implement best practice and raise standards across the industry and across the globe.

£5 – Macaroni Penguin: It is thought more than 1 million pairs of macaroni penguin breed on South Georgia. The species is classed as threatened by the IUCN and so on SGSSI their feeding grounds and breeding sites are highly protected.

Airmail Postcard Rate – Elephant Seal: Once again the master of the beach, these huge creatures are thriving and captured only by camera lenses of visitors and film-makers

Even against the backdrop of environmental policies and efforts made by GSGSSI and its stakeholders to restore and protect the SGSSI environment, there is still the threat of global climate change. This has the potential to affect the Territory in an irreversible and profound way. Looking ahead, it will be a priority for GSGSSI to contribute to global efforts to understand and tackle this unprecedented challenge and safeguard SGSSI for the future. 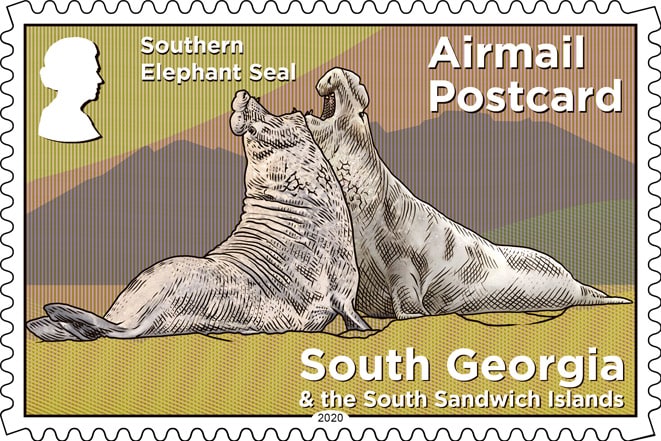