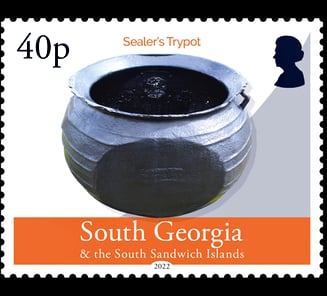 This week, the Government of South Georgia & the South Sandwich Islands (GSGSSI) was delighted to release a stamp set to commemorate the 30th Anniversary of The South Georgia Museum.

The South Georgia Museum at Grytviken is owned by GSGSSI, and operated by the South Georgia Heritage Trust, a charity registered in Scotland. The Museum plays a vital role in safeguarding the cultural and historical heritage of the UK Overseas Territory of South Georgia & the South Sandwich Islands.

The first proposal to establish a museum on South Georgia came in 1989 from David Wynn-Williams, a British Antarctic Scientist. At that time, it was suggested that the Museum be located in the derelict whaling station in Stromness. However, Grytviken was eventually chosen as a more suitable site; on account of its proximity of the wharf at King Edward Point and in recognition of it being the first whaling station to be built on South Georgia. The first Museum project group was headed by former Deputy Director of the British Antarctic Survey, Nigel Bonner, who lived and worked on South Georgia in the 1950s and 1960s.

The Museum was sited in the building known as the “Managers Villa”, which had become derelict and fallen into serious disrepair since the closure of the whaling station in the 1960s. In 1990/91 the entire Grytviken site underwent significant environmental remediation works to remove asbestos and other hazardous materials, and the Museum building was renovated during that time. The clean-up team were able to salvaged and transport heavy equipment from whaling stations across the island, including the first object registered in the Museum Catalogue, a rare 50mm bottle-nose cannon.

The renovation of the Managers Villa continued into the 1991/92 seasons with the installation of the first exhibits by Nigel Bonner and Ian Hart. The South Georgia Whaling Museum, as it was then known, was first opened to visitors in January 1992. In that first seasons, 480 visitors signed the museum visitor book between 23rd January and 5th March of that year.

In 1994, Robert Burton took over as Director of the Museum and remained in post until 1998. During that time, major improvements were made to the fabric of the Museum, along with the “Little Villa” next door, and the Church. Many more objects were also accessioned to the collection.

The most significant couple in the operation of the Museum were Tim and Pauline Carr, a pair of mariners who arrived at South Georgia on their yacht Curlew in 1992. They working in the Museum as caretakers, later becoming curators. Under their management the Museum expanded its remit to showcase more of the island besides whaling. New displays were added on the discovery and exploration of South Georgia and its natural history and administration. Further displays, including on the islands military and maritime history, have subsequently been added.

In 2006, the Museum was renamed the South Georgia Museum and management passed to the South Georgia Heritage Trust. During the Trust’s tenure there have been significant improvements in the care, documentation, interpretation and curation of the collections, thanks mostly to the appointment of professional staff including a permanent fulltime curator. More recently, the Museum has developed an online database of the collections.

The GSGSSI has continued to invest in the Museum site and buildings. Significant work was carried out on the Villa in the 2006/7 season, including the installation of a new roof, new windows, and replacement flooring.

As well as the objects inside the Villa, the Museum includes an outdoor display of exhibits too cumbersome to be brought inside. These include various harpoon guns, one of which, a Bofors gun, is believed to date from the 19th century and may have been the original gun on the first catcher to operate at South Georgia, the Fortuna. Along with numerous whaling cannon, the Museum houses a Gjelstad whale claw (used for hauling the whales up the stern slip onto ships), and a steam-powered bone saw. Also prominent in the outdoor displays are the great cast iron boilers previously located on the beach at Grytviken. These boilers, gryter in Norwegian, had been used to try-out (extract) oil from the skins and blubber of seals and penguins. Grytviken means “Boiler Cove” in Norwegian.

Since the Museum’s inception there have been many changes on South Georgia. As well as a well-documented resurgence in wildlife and eradication of many non-native invasive species, the number of visitors to Grytviken has grown significantly. In the first summer of operation in 1992/93, just six small cruise ships visited Grytviken and, by extension, the Museum. By 2019-20, that number had grown to almost 80 ships carrying in excess of 12,000 passengers.

The GSGSSI and the South Georgia Heritage Trust continue to work together to ensure that the Museum meets the needs of an increasing number of visitors, whilst moderating the impacts of increased footfall on the fabric of an historic building.

In 2022, the Museum remains a valuable resource for researchers, visitors, and enthusiast alike and plays an important part in telling the story of the Territory to a global audience.