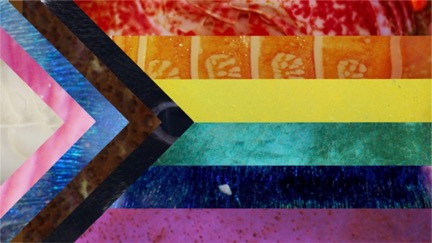 Today (18 November) the Government of South Georgia & the South Sandwich Islands (GSGSSI) and the Government of the British Antarctic Territory (BAT) are celebrating the inaugural Polar Pride Day. This day demonstrates a commitment to support and enhance Diversity in Polar Science.

To mark the day photos and stories are being shared on social media using the hashtag #PolarPride.  At King Edward Point and Bird Island all station personnel have got involved with celebrating this important day.

18 November is International day of LGBTQ+ people in STEM for 2020.  It is hoped that #PolarPride will become an offshoot of this to be celebrated every 18 November, since the Territories are such a strong focus for science, technology, engineering and maths.

As part of a series of activities and initiatives to mark the 200th anniversary of the discovery of Antarctica, the Diversity in UK Polar Science initiative, conceived and funded by the UK Foreign, Commonwealth & Development Office Polar Regions Department, celebrates existing diversity, and takes an important step forward to promote and enhance Antarctic and sub-Antarctic science opportunities to under-represented groups, including women, people from ethnic minorities, BAME, LGBTQ+ community and people with a disability.

When the day was first declared, Minister for the Polar Regions, Baroness Sugg, said:

“#Polar Pride will be an opportunity for those working in the British Antarctic Territory and South Georgia & the South Sandwich Islands to celebrate diversity and show their support for LGBTQ+ colleagues. I also hope Polar colleagues in the UK will get involved, to make everyone feel included to play their role in understanding and protecting the amazing Polar Regions.”

Dr Huw Griffiths, a bio-geographer at British Antarctic Survey and a member of the LGBTQ+ community, said:

The GSGSSI, GBAT, the UK Foreign, Commonwealth & Development Office and the British Antarctic Survey (BAS) are proud to support the #DiversityinPolarScience initiative: https://www.bas.ac.uk/project/diversity-in-uk-polar-science-initiative/ – a ground-breaking project that celebrates existing diversity in UK Polar Science and aims to deliver a more inclusive future for all.

Big thanks to the UK Foreign, Commonwealth & Development Office and the Government of British Antarctic Territory for funding the superb badges with the Pride in Polar Research logo.